The wild elephant could’ve gotten into the camp via the damaged electrical fence. 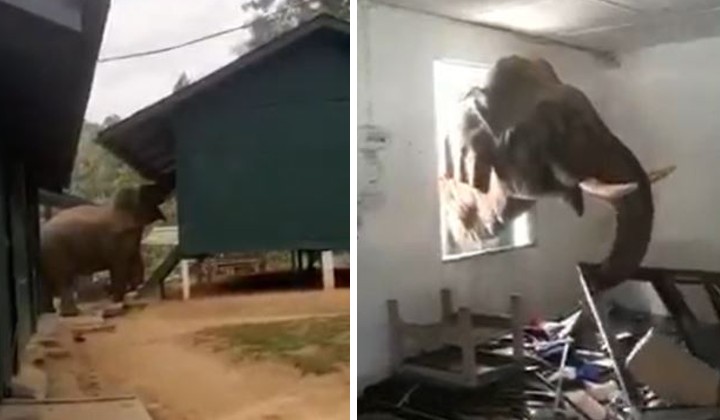 A wild elephant is seen roaming the territories of the Sri Banding Camp in Gerik as videos and pictures of the incident went viral on social media yesterday.

The videos showed the said elephant to be scavenging for food in their military ration storage, which belonged to the Malaysian Armed Forces (MAF). The elephant was also seen damaging some of the equipment at the place.

According to Bernama, Perak Department of Wildlife and National Parks (PERHILITAN) Director, Yusoff Shariff mentioned that they received a report about the elephant yesterday and said that the cause may be due to the camp’s faulty electrical fence.

The Gerik Perhilitan will assist and advise the camp for repair work and also mentioned to all parties to not provoke the animal if they come in contact with it.

Yusof further said that the elephant is believed to be the same one looking for food at the rest and service (R&R) area near Puncak Titiwangsa, Gerik. He added that this elephant is used to humans and is used to eating leftover food.

According to Berita Harian, Yusof said that this was not the first time for this type of incident to happen. Elephants have trespassed upon the camp numerous times due to the lack of maintenance of the fences which allows the elephants to enter. Only this time, it’s caught on camera and this went viral.

A similar case happened in 2018 near an army base in Tasik Banding too, reporting the destruction of some constructions in the area caused by a female elephant. Unfortunately, the elephant died, believed to be due to electrocution.

You can watch the viral videos here on TikTok.