A netizen said that the car belongs to her father, but was driven by a friend who is now in the hospital. 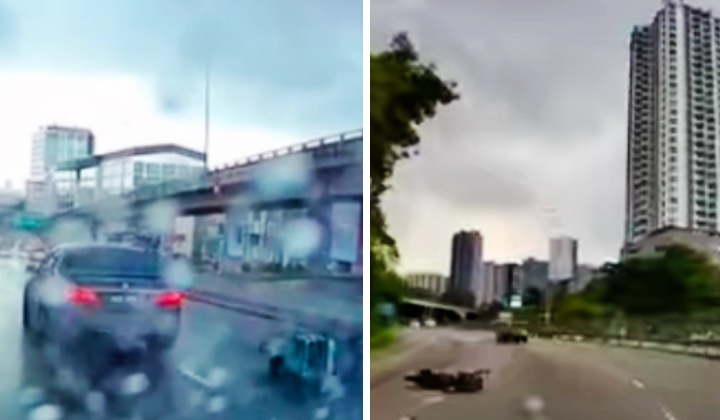 A BMW driver allegedly hit and run 3 riders within the span of 1 hour.

Videos of the incidents had gone viral on media social sites such as Facebook and TikTok.

In one of the videos, uploaded by a TikTok user Muqri Abdul Jabar, one of the food delivery riders was hit from behind by a dark-colored BMW car.

According to Muqri, the unfortunate victim is his brother.

Worse, the BMW driver sped off leaving his brother alone at the scene.

The videos showed the same BMW driver colliding with two other riders.

The hit and run incidents are said to had happened on the Sungai Besi Highway.

Accordingly, the three accidents happened within an hour. Muqri described the driver as dangerous and hoped anyone who found the vehicle would lodge a police report.

The public has shared the videos to help the innocent victims find justice.

Netizens appeal for any other motorists with possible dashcam footage, or anyone with information that may help with their investigation, to share their information.

There were witnesses who said that the BMW driver drove his car in a very dangerous manner and almost caused an accident to other road users.

I think he has a grudge against all the motorcycle riders.

A netizen commenting on the BMW driver’s reckless driving.

Netizens also run a check on the BMW’s plate number.

A TikTok user Ezamanjee claimed that the BMW belonged to her father-in-law, but it was driven by a friend at the time of the incident.

Accordingly, her in-law was in Johor Bahru at the time and had lent the BMW to his friend named Raju.

Ezamanjee added that her in-law and husband had gone to look for Raju to ascertain what actually happened.

At the same time, she is disappointed that netizens are making all kinds of negative assumptions and even threats.

Ezamanjee said her words had also been twisted with some netizens saying that her story seemed hard to believe.

She then updated that Raju had been found and was warded in Hospital Serdang.

Raju’s condition, and that of the BMW, was unknown at the time of writing.

Ezamanjee added that all evidence had been handed to the Serdang police for further action.