The man did not want to steal anything, but was instead just waiting for the woman to return home. 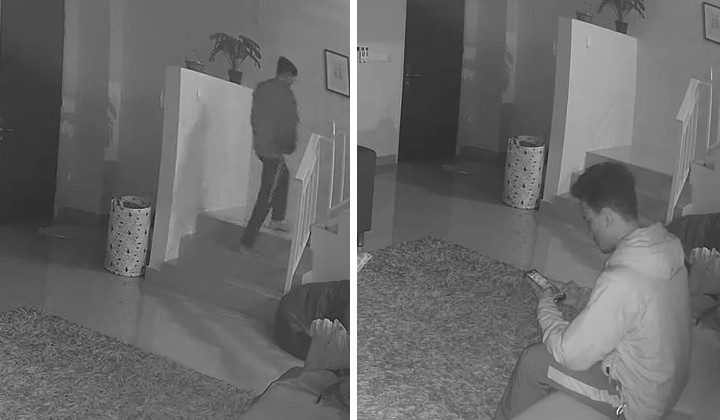 [Updated with clarification and comments from Ms Yuyun Nissa]

A woman in Johor recently went through a surprising ordeal when she caught a stranger in her house via CCTV.

Around 12.14 am on Thursday, 10th February 2022, the woman was on her way back home after dinner when she suddenly noticed a notification from her CCTV app saying “motion detected”. Then she opened and watched the live CCTV, shocked to see a man in her house apparently wearing a security guard uniform.

She then recognized that it was her housing area’s security guard, wandering around her house while charging his phone. He also removed his outer jacket and trousers while apparently waiting for the woman to come home in the living room.

He contacted the woman via WhatsApp asking her about her whereabouts by calling and also messaging. She noticed that the guard’s intention was not to steal anything in the house as he didn’t rob anything but rather to wait for her with bad intentions.

When asked around when did she notice the guard working there, speaking to TRP, she said that the guard had only worked there for around three or four months, about the same time as she just moved into the neighbourhood with her family.

He got my number around 3 days before the incident as he said that he wanted to add me in the residential area community group.

I did not think long at the time because I really had just moved in and was not in the Whatsapp group yet, so I needed to know any updates in the group.

It’s also handy for a guard to get the number if any guests of mine came to my house and needed verification to enter.

She further stated that her house was indeed locked but somehow he managed to get in. She was so shocked and grateful that she and her kids were not in the house at the time as something bad could have happened.

She called her sister and brother in law to check her house because they live just in the vicinity of her house. Just as her brother in law made it to her house, the guard left her house and accidentally left his security guard uniform in the house.

She lodged a police report and the next day, the culprit was caught by Johor PDRM. The police told her that the guy was involved with drugs before and had cases involving narcotics.

Currently, the suspect is being remanded and her case is still ongoing. So far, there’s no update to the case yet.

She was grateful for her and her kids were not harmed in this situation and advised others to always be extra careful and don’t trust others easily as we don’t know who might have bad intentions for us.

Especially to women out there, eventhough we live in a guarded area, don’t take things for granted and always be alert of your surroundings.

Do not trust people easily as what happened to me can be taken as a lesson for anyone out there and open their eyes.

Also, if you are able, then my advice to you is to install a CCTV just in case something bad might happen as it can acually help you get proper proof of any unforseen incidents.

She also said that her decision to put up the CCTV was purely to supervise her kids and did not expect that it would become handy in this sort of situation.