The father of the two children was arrested to assist in the investigation. He tested positive for drugs in the urine test. 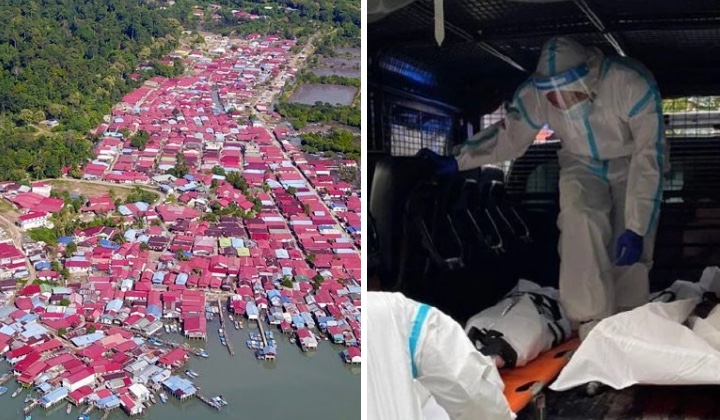 Two Myanmar siblings, aged four and two respectively, are believed to have died of eating leftover food in a rubbish bin.

Nizambudin Jamaludin, 4, and his brother, Ngei, 2, were reported dead near the scene at 5.40 pm.

Langkawi District Police Chief Assistant Commissioner Shariman Ashari was quoted by Sinar Harian saying that the children who died were believed to have eaten food waste.

The food waste were in a rubbish bin in the area where the kids were found.

Police had since detained the kids’ father for investigation.

The father of the two children was arrested on Sunday night to assist in the investigation. He tested positive for drugs in the urine test.

ACP Shariman Ashari on how the incident was discovered.

According to preliminary investigations, the kids were staggering and foaming at the mouth when the father found them near the rubbish bin.

He then took them to a nearby neighbour’s house.

A few minutes later, the two children were found not to be breathing before the villagers contacted the police, said Shariman.

Shariman said the boy’s father earns a living by repairing boats and taking odd jobs in the village.

The family had no permanent residence and only stayed at a neighbour’s house.

The death was confirmed by medical staff and the two bodies were sent to the Sultanah Maliha Hospital Forensic Unit for Covid-19 testing and autopsy.

Bukit Malut is an illegal settlement which encroaches the Bukit Malut mangrove forest reserve, located about 20 kilometers from the town of Kuah in Langkawi.

The settlement, which includes several small villages, is considered the most dangerous location on the resort island, following reports of frequent criminal and drug-related cases.

Piles of rubbish are often left piled up around the houses, resulting in unpleasant odors.

Accordingly, the illegal immigrants who live there came from Myanmar since decades ago.

However, the Kedah branch of the Malaysian Historical Society said it is a misconception.

Its chairman Dr Ibrahim Bajar said Bukit Malut was originally a forest area before the government moved fishermen consisting of anchovy trawlers to the area.

The people there are the original community of Kedah Malays who came from Myanmar in 1982. Once upon a time, their district was under the rule of the Kedah Sultanate.

He said Langkawi has been the closest place for them to commute since long ago and this first group has come to seek refuge and live in Bukit Malut.

They can speak Malay with a Kedahan dialect.

These people are not only in Bukit Malut but also in several other areas in Kedah such as Pendang. Over time, they assimilate with the locals and their children also study at school at Sekolah Kebangsaan Kampung Bayas, Langkawi.

Dr Ibrahim Bajar on the origins of the Myanmar people in Langkawi.

[Watch] Old Video Of Kids Playing On The Road At Night Resurfaces On Social Media, Netizens Annoyed By Their Behaviour

“It’s Criminal!” Parents Worry That Malaysian School Subjects Are Too Difficult For Children To Learn