Zailah said the ‘gentle’ physical touch educates in a way which is not painful but loving. 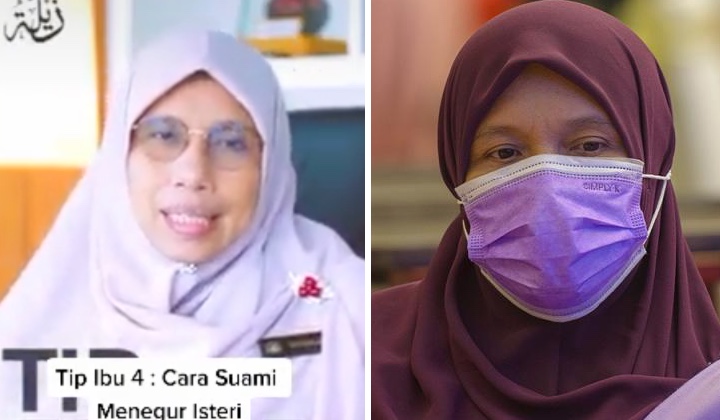 Giving tips to married couples on how to maintain marital harmony, the PAS leader said husbands can use “gentle but firm physical touch” to rebuke their wives.

She said if a husband wants to reprimand the wife for not covering her aurat or doing things he doesn’t like, then the husband tells her in a good way.

Accordingly, in Islam, a husband is allowed to put a little pressure on his wife by separating the bed for three days so that she feels how the husband really does not like her actions.

If the advice falls on deaf ears and separating the beds also does not work, then the husband can hit by way of a gentle physical touch that educates lovingly, in a way that is not painful but shows firmness.

Siti Zailah advising husbands to use ‘gentle physical touch’ to correct their wives.

At the same time, she said women should not confront their husbands over anger or disliked behaviour when the man is still angry.

She said it’s better for wives to remain silent and not talk back as it would only make matters worse.

Speak to the husbands when they are calm, are full and have finished eating, have prayed, and are relaxed. When we want to speak, ask for permission first.

Siti Zailah advising wives on when to talk to their husband.

Better Off Saying Nothing At All

The advice given by Siti Zailah was criticized by Permatang Pauh MP, Nurul Izzah Anwar and Segambut MP, Hannah Yeoh.

The pandemic has only seen an increase in domestic abuse with a total of 9,015 cases were reported – predominantly against women. This so called ‘advice’ by the deputy minister is a disservice and goes against current realities & needs. https://t.co/QoOd6b0gud Reference tbc 1/3

Nurul Izzah cited an article by Islamic scholar Abdullah Hassan which pointed out that the Quran and Islam do not permit husbands to hit their wives – lightly or not – or abuse them.

She said it is dangerous for Siti Zailah to make such a video because a gentle but firm physical touch can be very subjective.

Ask the ‘team’ of doctors, activists and NGOs who handle domestic violence cases every day, is it appropriate for a topic like this to be discussed through a two -minute video.

Siti Zailah has previously given domestic advice which was controversial.

In April 2020, she posted a video acknowledging that the movement control order (MCO) might put stress on families, leading to domestic violence.

Her message was interpreted by critics –  in the context of the entire video clip – as saying that women should accept, be patient, and forgive their abusive partners.

Siti Zailah’s advice also drew a comparison to a series of posters on “Kebahagian Rumahtangga” by the Women and Family Development Ministry.

The sexist messaging drew the ire of the public. Women’s Minister Datuk Seri Rina Harun was blasted for stereotyping women as being bossy and naggy.

These posters were also criticised for sending the message that it’s women’s responsibility to change their behaviour in order to maintain harmony at home.

@KPWKM posted some controversial PSAs on their Instagram accounts, and since have deleted these posts.

These cartoons advised women of Malaysia to be 'humorous' like Doraemon and to doll up to WFH.#WanitaBukanDoraemon

“Spender” Danger: How A Pair Of Panties Almost Cost A Marriage