Sole survivor Nor Aqilah clarified that they were just stopping to eat and rest inside their vehicle. 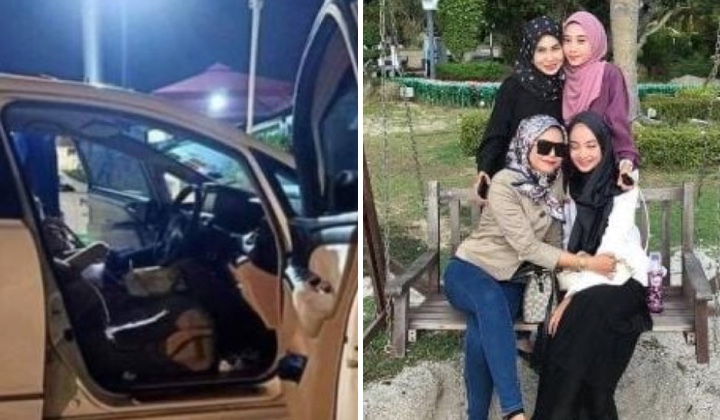 The September 2020 incident happened while the girls – all 21 years old then – were on their way home from vacation.

It caught the attention of many following the death of three of them in the blink of an eye.

The only survivor of the carbon monoxide poisoning tragedy, Nor Aqilah Mohd. Safwan recounted the tragedy on social media recently.

Nor Aqilah made it clear in the TikTok video that the four of them did not sleep in their car, as believed by some parties.

First of all, we did not sleep. We just stop to buy food, get back in the car and then we don’t remember what happened. We chat for a while in the car but I can’t remember the rest. When I opened my eyes, I was in hospital. The first thing that came out of my mouth was where are my sisters.

The four of them are understood to have stopped at the petrol station in PLUS Samagagah, Penang.

They were resting while on the way back to their home in Sungai Petani and Gurun in Kedah.

The girls, who were awaiting graduation, were coming back from a holiday in Pulau Jerejak, Penang.

They were found unconscious in the car at about 1.40 am, with the engine still running.

Nor Aqilah was initially admitted to the Intensive Care Unit (ICU) of the hospital. She was in a coma and eventually survived.

After she was transferred to a regular ward, her father informed her of the sad news that her twin sister and two other friends were gone.

No one can reject destiny, but can only calm down and continue living. Al-Fatihah for my friends in heaven.

Carbon monoxide poisoining survivor Nor Aqilah accepting the tragedy that befell them.

The Danger Of Carbon Monoxide Poisoning

The autopsy report found that various organs of the three victims failed to function due to carbon monoxide poisoning.

The vehicle in which the four friends were riding had a leak in the car’s exhaust and emitted a very strong noise and smell of smoke.

Nor Aqilah’s twin, Nor Adilah, died while receiving treatment at the Lumut Army Hospital, Perak.

The two others were Sharifah Fariesha and Ayuni Shazwanie Sabri.

Sharifah was confirmed dead in the Honda Odyssey MPV while Ayuni died while being treated at the Seberang Jaya Hospital.

Ayuni’s father was said to have gone out to look for his daughter when she did not arrive home at 11 pm.

They last kept in touch when she sent a message to her mother at 9.15 pm.

Nor Aqilah’s posting had since gone viral and has reached more than 600,000 views.

Netizens, including those who helped at the petrol station that day, gave their sympathy and words of encouragement to the girl.

Others said there are silver linings embedded within tragedy, while others remember the victims for their positive personalities.