Farmers are demanding the government take necessary measures to protect their livelihood by imposing a minimum price. 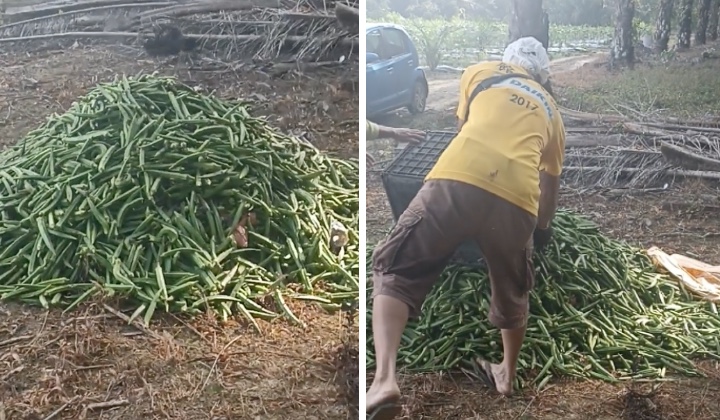 According to one of the affected farmers, CK Pang, the vegetables had to be thrown away due to the drastic drop in prices caused by overproduction.

Irked by the low prices, he dumped a huge pile of ladies fingers which he claims are worth less than a ringgit per kilo now (farmers’ price).

The dumping was recorded and uploaded to social media.

Farmers would not be able cover their cost with the low prices. It would be cheaper to throw the vegetables away than to pack it for sale.

CK Pang on why farmers would rather left mountains of vegetables to rot.

Initially, Pang had offered to give it away free, and people just had to collect it from his farm.

However, he updated today (8 February) that the vegetables are starting to rot, and are no longer fit for consumption.

When Vegetables Cost More Than Meat

The farmers’ predicament drew the attention of netizens.

They pointed out the price difference between what the farmers get for their produce, and how much consumers had to pay the retailers.

Granted, the increase of logistics costs and production costs had to be factored in for the retail price.

But the difference in what the farmers get and what the consumers pay can be substantial.

Others pointed out that agricultural workers, who are mostly foreigners, would run away if they are not paid on time.

They said the farmers would have a problem even after the prices recovered, as it is hard to get foreign workers these days.

The Negative Effects Of Price Control

At the same time, it also worsens the livelihood of farmers.

In agriculture, prices are subject to strong fluctuations, while the production cost, such as fertilizers, has gone up tremendously.

Citing examples of price fluctuation, he said yau mak (romaine lettuce) can fetch the farmers RM8 per kg but is not more than RM1.50 per kg recently.

Even then, consumers still have to pay top dollar for the greens.

He said the farmers ought to be paid a minimum for their produce, which is guaranteed by the government.

Chai said it is only fair as the government puts a ceiling price when demand is much more than supply.

Citing the current chicken price fiasco, he warned that a time will come when vegetables will be so expensive due to a drastic drop in produce.

Farmers will not run a losing business just so that the government can appease the rakyat by keeping prices artificially low. The farmers will die financially.

He added that farmers in Cameron Highlands do not have to dump vegetables, for now.

However, the government should stop the exploitation of farmers immediately before history repeats itself, said Chai.

“Just Grow Your Own Vegetables And Chickens” Says Perak MB