The man was withdrawing some money when he found out that the doors had been locked. 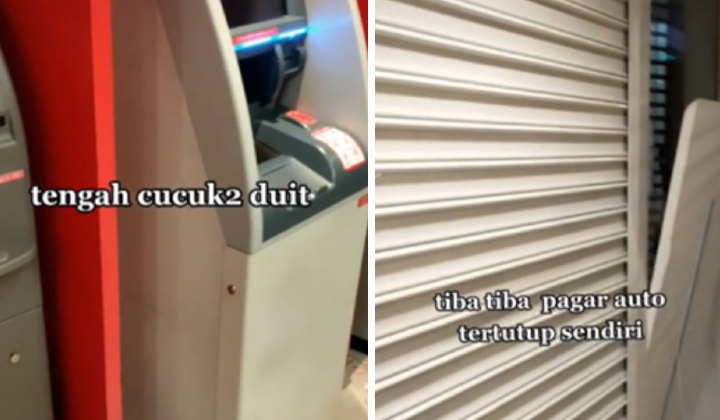 A video of a man getting trapped inside a bank in Kuala Lumpur recently went viral on TikTok.

TikTok user @asyboi posted a clip with captions that say he was withdrawing money from the ATM when the roller shutter came down.

In the video, he can be seen trying to exit the bank after the shutters had completely rolled down.

@asyboi claimed he saw the roller shutter coming down, but could not leave in time as the ATM was slow in dispensing cash.

According to a netizen’s comment, the incident was said to have happened at a CIMB branch in Taman Tun Dr. Ismail.

He later called the bank, in an attempt to get out.

Accordingly, the bank informed him that there is a door exit release button accessible from inside.

Netizens joked that he could have just spent the night in the bank.

Others noted that he would be in deep trouble if he had diarrhea and need to relieve himself.

They added that he was lucky that his phone still has power.

He was also advised not to withdraw money from the bank at ungodly hours.

They do have a point. It might be well lit, but if you are robbed or hurt, no one will be around to help you.

Use an ATM in the daytime to minimize the likelihood of any untoward incidents.

Chances are better there will be plenty of people around.