Wildlife expert said there are definitely tigers there but it’s no cause for immediate concern. 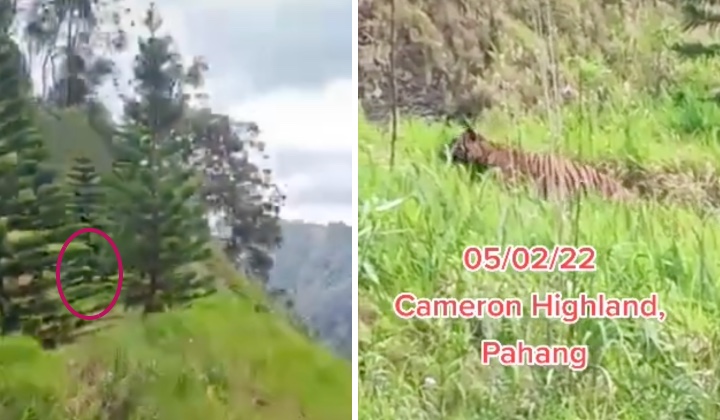 A video of a tiger standing on an embankment next to the Simpang Pulai route to Cameron Highlands has gone viral on social media.

The federal route is one of the main road that leads to the popular highlands holiday region.

Accordingly, the location of the sighting is near the Perak-Pahang border.

It is also not far from Kampung Raja village in Pahang, and Lojing, which is part of Kelantan.

The Perak Department of Wildlife and National Parks (Perhilitan) said it is looking into the matter.

Its director Yusof Shariff said rangers had been sent to the location for further action.

He did not specify what actions will be taken.

As at time of writing, Perhilitan had yet to spot any tiger in the location.

Andrew, who is chief executive officer of Ecotourism & Conservation Society Malaysia (ECOMY), said tigers are known to roam in the vicinity of the area.

The Simpang Pulai route straddles alongside the Titiwangsa range, the chain of mountains that forms the backbone of the Malay Peninsula.

It’s a common thing, nothing strange. Unless there is a regular sighting at the same spot, it’s most likely a chance encounter.

Wildlife expert Andrew Sebastian to TRP on the sighting of the tiger.

He said overdevelopment had led to more frequent occurrence of wild animals from wandering onto the road.

The overdevelopment had fragmented the region’s tiger population, splitting them up into smaller groups that might have been separated from each other.

At the same time, Andrew noted that tigers are typically wary of humans and usually show no preference for human meat.

Most tigers will only attack a human if they cannot physically satisfy their needs otherwise.

Wildlife expert Andrew Sebastian to TRP on whether a tiger will attack if it sees human.

He added that road users should not get out of their vehicles because of the danger from dangerous wild animals.

They should also refrain from getting close to take photos or videos of them.

Go Mountain And Meet The Tiger

The Chinese have a saying that one mountain cannot contain two tigers.

But another video had also gone viral showing a tiger walking on the road, supposedly also in Cameron Highlands.

Netizens claimed that the sighting happened along the Tapah road, which is far away from the Simpang Pulai route.

Perhaps the authorities should caution road users about the existence of tigers in the area and put up more warning signs in appropriate locations.

Such signboards have been used to prevent death and suffering of animals caused by vehicles.