In what is a case of violence begets violence, the man who refused to wear a mask and went berserk was beaten up by a mob. 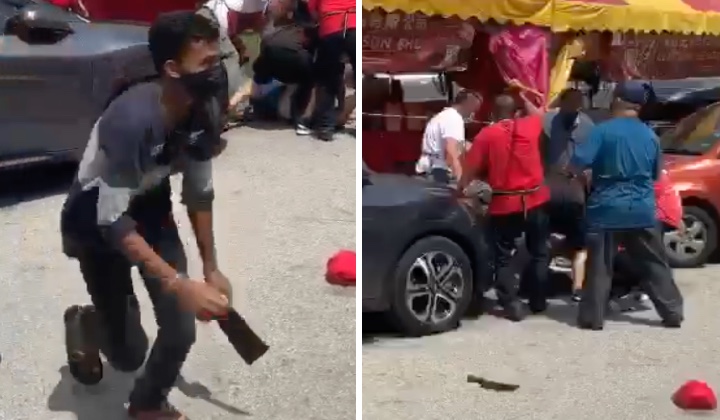 It has been more than 2 years since the Covid-19 pandemic hit the world and by now, there should be no more hesitation about wearing face masks.

When you wear a mask, you protect others as well as yourself.

Unfortunately, some people still refuse to put on a mask or face covering when they leave the house.

Recently, an anti-masker raised a fuss and created a disturbance at a restaurant in Ipoh Garden.

The drama was uploaded to social media by Facebook user B’Fx Temmy Ho. It went viral and was shared by other netizens.

Accordingly, the man was reprimanded by others for not wearing a mask while getting his food at a coffee shop.

Angered by the reprimand, he left but it was not the end of the drama.

Everybody Was Kung-fu Fighting

The man returned shortly after with a vengeance. Armed with a stick, he started smashing things around.

After venting his anger and leaving a trail of destruction in the coffee shop, the man walked out towards a car.

It was then that the public confronted him which led to an altercation. Accordingly, the coffee shop owner had tried to take on the man.

However, the man was stronger physically which led to others coming to aid the coffee shop owner.

In the ensuing scuffle, the man was heavily outnumbered and pinned to the ground.

It was an ugly scene as the public beat the man continuously, including with the stick that was used to thrash up the coffee shop.

According to passersby, a siew yuk seller who was holding a cleaver also joined in the melee.

Thankfully, he at least had the sense to put down his cleaver on the ground before ‘helping out’.

While the beating went on, the butcher’s knife was retrieved by others in fear it could be used as a weapon.

It is understood that the coffee shop owner had lodged a police report on the incident, although it cannot be verified at the time of writing.

Hopefully, the matter will be handled according to law and action will be taken against anyone who committed an offence.

At the same time, let’s be reminded that the public can’t take the law into their own hands.

Netizens pointed out that violence merely increases hate and instead of diminishing evil, it multiplies it.