The pet owner was infuriated that the driver who killed his dog did not feel any remorse. 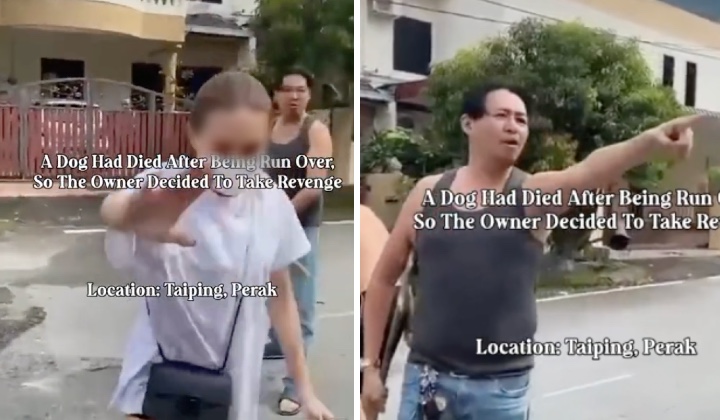 When a cherished pet dies, it’s normal to feel racked by grief and loss.

The pain of loss can sometimes feel overwhelming and trigger all sorts of painful and difficult emotions.

A pet owner in Taiping suddenly become very angry when his dog was hit by a car, and he flew into a rage.

In the incident which took place in Taiping, the pet owner was seen rampaging after his pet dog was killed when hit by a car.

In his anger, he used a stick to hit at the car repeatedly.

As his anger escalated, others tried to calm him down but to no avail.

He also harassed a woman who is believed to be the driver.

It is understood that what made him so furious was the attitude of the driver.

Accordingly, the driver felt not remorse and even said that it’s just a dog.

Netizens expressed empathy at the pet owner for feeling devastated at what happened to his beloved dog.

They also criticised the woman for being remorseless.

Some claimed that the pet owner was also hit by the car, but it cannot be verified.

Are You Liable If You Hit A Dog?

Animals have been among the most common victims of road accidents.

According to Asklegal, the owner is responsible to keep their pets under control.

If a dog runs freely outside and gets hit by a car, the driver will not be held liable.

In any case,  it is important for drivers to be responsible and take accountability for the actions they have committed.

After all, there is no such thing as an accident and there is always a cause.

It’s part of life that accidents happen, but people will find it much easier to forgive if you at least show empathy.