Nearby premises have been to stop work and vacate the place until further notice. 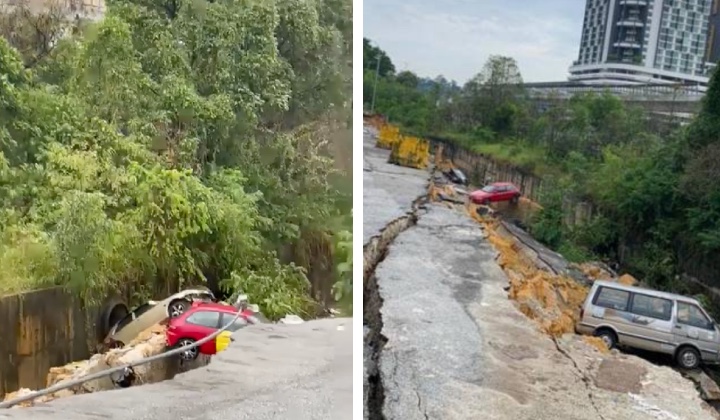 The landslide incident that occurred at Jalan LP1A/2 Lestari Perdana, Bandar Putra Permai here on Tuesday evening is the second time it has occurred around the area.

This is the second incident that has occurred in this area involving landslides and we are taking the matter seriously. We will work with several other agencies to identify the real cause of the incident.

Johary was quoted by Astro Awani as saying that a complete report on it will be compiled, as soon as the study on this incident can be done in full.

He said the work to install piles around the sediment area has been in full swing since Tuesday (25 January).

It is to ensure that underground movement can be reduced to prevent the area from settling.

The restoration work is expected to take about a week to complete.

Meanwhile, a total of 17 commercial premises around the landslide area have temporarily stopped any operations.

Serdang District Police Chief ACP A. Ambalangan said in a statement that all of them will only be allowed to return until the situation is safe.

17 commercial premises in the area around the landslide, which occurred involving about 150 meters, have been ordered to cease any operations temporarily.

ACP A. Ambalangan on safety steps taken to prevent any untoward incidents

In the incident, five vehicles parked in the area were badly damaged when the landslide occurred.

Thankfully, no one was injured.

It was recorded by netizens and widely shared on social media.

Witnesses said the public suspected something was amiss, but the incident happened so fast and they could not move all the cars in time.

Alter Jasan, 48, said the incident started with a small crack before the ground movement occurred.

Selangor Fire and Rescue Department (JBPM) director Norazam Khamis said his department rushed to the scene after receiving a call at 6.38pm.

Landslide accidents are not uncommon in Malaysia, sometimes due to contractors cutting corners, lax safety standards, decaying infrastructure and overdevelopment.

READ MORE: Landslides In Cameron Highlands: Tourists Advised Not To Travel At Night

Among Malaysia’s worst landslide accidents in recent times was a landslide at the Simpang Pulai-Cameron Highlands road, which occurred in December last year.

The landslide, which occurred in the afternoon following heavy rain, claimed the lives of two people.

The road was impassable to vehicles as debris from the landslide covered a 100m stretch and affected both sides of the road.