Anissa’s tenacity to start a business on TikTok, despite her visual impairment, was praised by netizens. 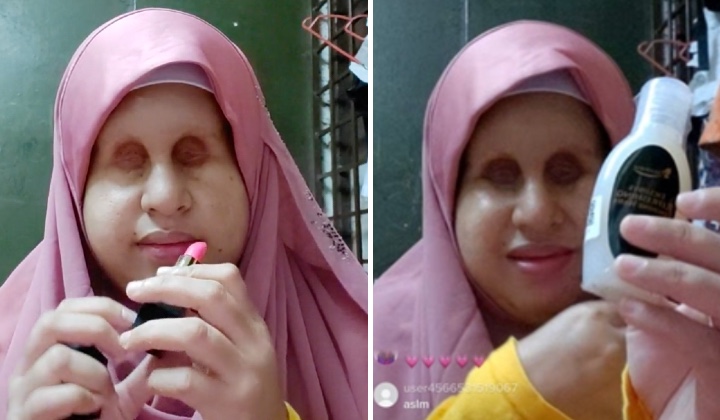 The social media is abuzz with a TikTok user known as Khairul Anissa Mat Samsuddin who is selling cosmetics on the platform despite being visually impaired.

The 32-year-old woman was quoted by Kosmo as saying that despite being born with vision problems since childhood, she is not surrendering to her fate.

Anissa wants to prove that despite being disabled (OKU), she is still determined to earn an honest living like everyone else.

The mother of two from Klang is actively selling various types of products, from health food to beauty.

I don’t want to sit around doing nothing while hoping for sympathy and compassion. I want to prove that even if I don’t see it, inshaa Allah with the right effort, there will be success.

However, Anissa did not deny that because of her shortcomings, she continued to be judged with a skeptical view.

Some doubted my ability to sell this and that. Sometimes I feel like crying and leaving the business world.

Khairul Anissa Mat Samsuddin on being looked down upon

There Is No ‘No’ In Her Dictionary

However, Anissa refuses to give up and she does not want to complain.

In fact, she believes in strengthening herself to prove that she can also do fine just like other normal people.

At one time, she managed to register sales of RM1700 within two weeks.

Anissa described the feat as an encouraging and satisfying experience.

According to her, she was originally born normal but 10 months later she was afflicted with eye cancer and lost her sense of sight.

Netizens praised her for being determined and willing to put in the effort to achieve something.

Some wished Anissa all the best in her business, while others praised her for being beautiful in her own way.