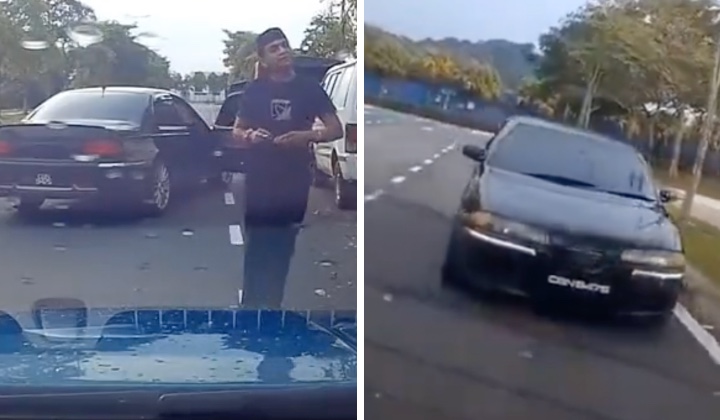 Regardless if it was your fault or not, there will always be road bullies who take the law into their own hands.

Recently, a dashcam footage showed the driver of a Proton Perdana acting like a thug when he failed to cut a line in a lane at the Setia Taipan area.

Dissatisfied when he failed to cut the line, the driver of the Proton Perdana started to chase in an attempt to stop the other vehicle.

The other driver, who recorded the incident on his dashcam, was sending a friend home at a residential area when the incident happened.

After tailing for some distance, the road bully stopped his car in front of the other vehicle.

The road bully then came out from the Proton Perdana.

He did not bother to wear a face mask, and was behaving like a thug as he approached the other car.

The Wicked Flee When No One Pursues

However, the man got cold feet and left after he was told that the owner of the dashcam would go to the police station.

Accordingly, the road bully was also told that the whole incident was recorded through the dashcam.

However, that was not the end.

Netizens ran a search on the road bully’s car number and found that he had 38 unpaid summons with a total fine of RM8,150.

Netizens blasted the road bully for his hostile, aggressive mindset.

They also scolded the road bully for giving religion a bad name by wearing a kopiah and not wearing a mask.

What To Do If You Are Being Followed

As a general rule of thumb, it’s better to avoid road-rage incidents because they can never end well.

When you encounter a road bully, DO NOT drive home or to your place of work.

If necessary, flash your lights and sound your horn to notify other road users of your situation.

If they persist in following you, drive to the nearest police station or a safe place where there are plenty of other people around.