Users on Twitter pointed out that Taman Sri Muda flood victims went to the event because they wanted help. 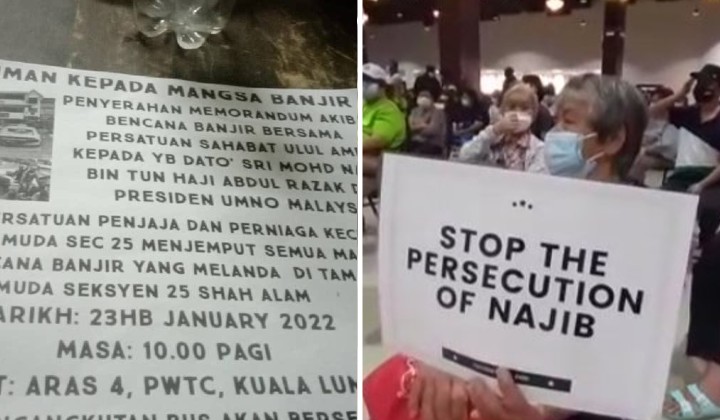 Taman Sri Muda flood victims were allegedly duped thinking that they were attending an event to receive aid but it was actually a rally in defense of Former Prime Minister Datuk Seri Najib Tun Razak.

This was revealed after a user posted on Twitter saying that people gathered in Putra World Trade Centre in support of the convicted Former Prime Minister.

Attached to the tweet are pictures of people holding placards that had slogans like “Stop The Prosecution Of Najib” and “Tangkap Zeti, Bebas Najib” (Catch Zeti, Free Najib).

Netizens pointed out that they were actually flood victims seeking help

After the tweet gained traction online, one user pointed out that the people who attended the event were actually flood victims from Taman Sri Muda.

He quoted the original tweet saying that people around the area thought that aid is going to be given out by Najib and Umno President Datuk Seri Ahmad Zahid Hamidi based on a flyer that was shared amongst the residents.

He then posted a video of the event in a subsequent tweet, saying that the residents were offered free bus rides and they were only there because they wanted some help.

Although Taman Sri Muda residents have received help in the past, he mentioned that it’s not enough for them to restart their lives.

Meanwhile, some users on Twitter dug up posters of the Najib solidarity event which was held on the same day and at the same venue.

They also questioned why are the event organisers manipulating the flood victims for their own gain.