The man unsuccessfully tried to drive off with the clamp still on the tyre. 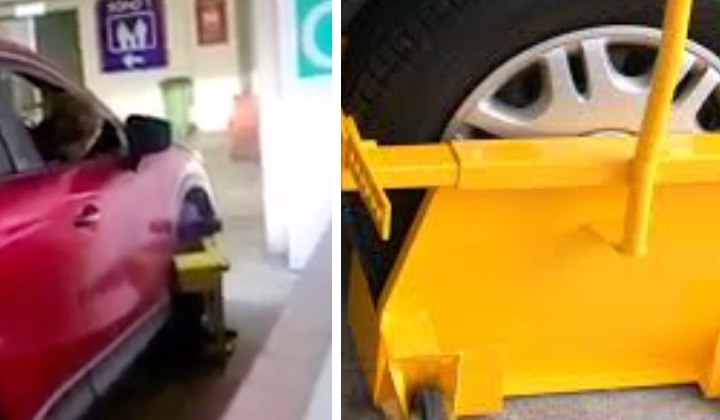 What excuse would you give if your vehicle is ticketed, towed or clamped?

Recently, a video went viral on social media which showed a Mazda SUV owner trying to move his car even though security guards had clamped his vehicle.

As soon as the man got out of the car, he vented his anger at the security guard by claiming that he was in a hurry to go to the hospital because there was an emergency.

In the end, the guy admitted his fault and insisted on leaving his identity card and house key so that the clamp could be opened.

However, the security guard remained adamant that the man must pay a fine of RM100 first if he wanted the clamped to be opened.

It was the right thing to do because security guards do NOT have the right to withhold other people’s MyKad under any circumstances.

Whoever Is Slow To Anger Has Great Understanding

The video caught the attention of netizens, with some saying that the man should have calmed down and spoken nicely.

The believed that if he did so, the security guard would probably give grace and open the clamp without any problem.

But at the same time, some sided with the man after he claimed to be in an emergency.

They noted that since he was willing to leave his identity card and house keys to go to the hospital, he could be telling the truth.

Others pointed out he would have ended up paying so much more for the car repair when he tried to drive off with the clamp still on the tyre.

[Updated] Security Guard In Johor Breaks In, Takes Off Clothes In Woman’s House While Waiting For Her Return