The initial design and choice of colour for this year’s CNY deco had been compared to a joss paper effigy burned during Qing Ming. 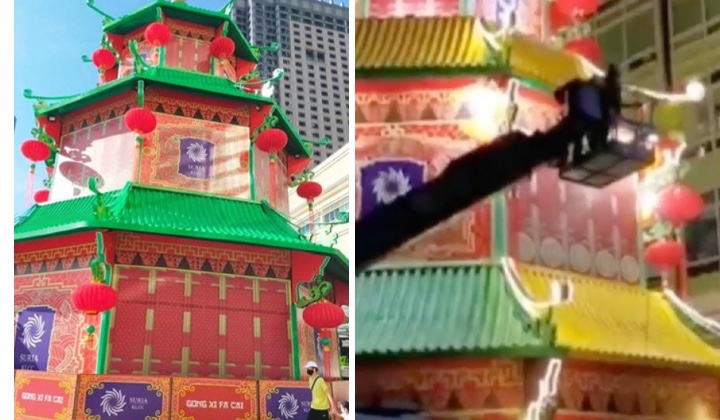 Roses are red, violets are blue and pagodas are, well, yellow.

Recently, a Chinese New Year decorative pagoda with a green roof outside Suria KLCC was ‘repainted’ to yellow.

China Press reported that the makeover was carried out on Tuesday (18 January) at night after the pagoda sparked controversy because of its design.

Netizens commented that the color and material resembled a joss paper effigy burned by the Chinese during the Qing Ming (Hungry Ghost) Festival.

Much to the credit of Suria KLCC, they listened to advice and made changes to make customers feel welcomed and appreciated.

Now the color of the pagoda has changed from the original green to golden yellow.

In 2020, Suria KLCC also put up a pagoda to celebrate the Chinese New Year.

The original design sported a golden roof with red walls.

In fact, the feat was recognized in the Malaysia Book of Records 2020 as Malaysia’s tallest pagoda structure.

If It Ain’t Broke, Don’t Fix It

For that, Suria KLCC had every reason to reuse the same idea.

However, they would not have imagined a slight change in design and the choice of color would create such a hoo-ha.

Critics pointed out that it looked too much like joss paper effigies which are common during the Ching Ming Festival.

Others pointed out that it could a typical case of expectations being different from reality.

When it comes to Chinese New Year, there are several taboos to be observed, including avoiding words, colors or items which are associated with the dead.

Joss paper effigies are burned to honor the dead and in the belief that the deceased would receive the burned items in the afterlife.

At the same time, others said the green pagoda reminded them of deities in Chinese mythology, notably Li Jing which appears in the classic 16th-century Chinese novel, Journey to the West.

Also known as Pagoda-Bearing Heavenly King, Li is a god which carries a pagoda-like tower that can capture any spirit, demon or god within its walls.