The teenager’s grandfather stepped to vindicate the mosque which had been criticised for punishing the boy. 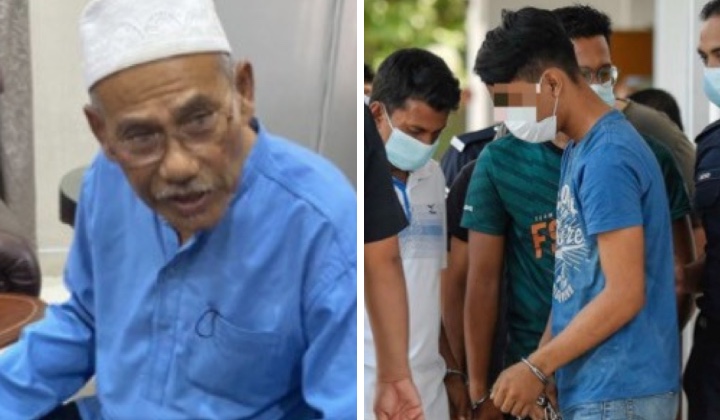 The issue surrounding the teenager who stole money from a mosque, Daniel Iskandar, has become a hot topic.

Previously, it was alleged that he stole in order to buy medicine for his sick grandfather, drawing sympathy from the public.

However, according to Sinar Harian, the police had just issued a statement that the teenager was confirmed positive for syabu following a urine test.

Not The Mosque’s Fault

Accordingly, the senior citizen himself instructed the mosque committee to turn in his grandson to the police.

Citing a Malaysia Gazette report, Daniel’s grandfather, Rosli Sidek stated that he did not want others to suffer the same fate as his family as a result of Daniel Iskandar’s negative attitude.

Rosli Sidek also asked netizens not to blame the mosque committee for the viral video in which Daniel was sprayed with water according to Muslim burial processions.

The incident created such a backlash and the imam of the mosque was criticised for being heavy-handed in punishing the teenager.

So much so, that the imam of the mosque reportedly resigned.

Daniel Iskandar is a troubled teenager and I am not willing to take care of him because of his uncontrollable and aggressive actions. It is very likely that he has taken illegal substance and has become an addict because he often behaves unexpectedly.

Rosli Sidek on his grandson

At the same time, Rosli added that his grandson used to steal the family’s money, motorcycle, umrah savings and mobile phone.

Accordingly, Daniel had also threatened to hurt his grandmother and often came home late at night.

Not Afraid To Discipline

No discipline seems pleasant at the time, but painful. Later on, however, it produces a harvest of righteousness.

Hence, Rosli did not care at all when his grandson’s video went viral on social media and was even grateful for the ‘education’ given.

Rosli added that the mosque had consulted him before taking action.

He also told the mosque to immediately report his grandson to the police for investigation.

I’m not slighted at all and I’m thankful he was educated for stealing. He is lucky they didn’t use hot water on him.

Rosli Sidek on the action taken against his grandson

There’s Always Another Side To Every Story

Rosli said he never asked for money from his grandson to buy medicine.

In other words, he would never put his grandchildren in a position that would encourage the teenager to steal.

In fact, according to Rosli, he has been receiving assistance of RM400 a month from the Selangor Zakat Board.

The mosque committee is always in touch and provides basic necessities such as rice every month.

Rosli Sidek on the family’s welfare

At the same time, Rosli also voiced a request that his grandson be admitted to a shelter or skills centre upon release from prison.

Recently, the Selayang Magistrate’s Court sentenced Daniel to 10 days in jail and fined him RM4,000 for trying to steal the mosque’s coffers.

Parti Amanah Negara (Amanah) Youth have since offered to pay the fine.