Some kids complain that their toys were missing, this boy didn’t even have toys to complain about. 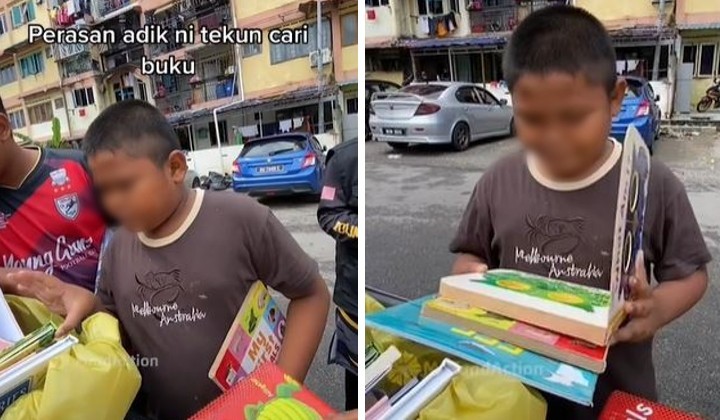 Some kids can be labelled spoiled if given too many toys as they can take them for granted, right?

Recently, a Malaysian non-government organization named @myfundaction has uploaded a video of their volunteering efforts for the flooding relief help on their social media.

This one particular video caught the attention of netizens where the volunteer asked some questions to a boy while they were giving out free children books to the kids affected by the flood in Taman Sri Muda.

When giving out the free books, the volunteers noticed a boy diligently looking for something there. He was actually looking for drawing books.

Then, as seen in the video, a female volunteer conversationally asked a boy named Arash whether his house was affected by the flood.

After the boy nodded yes, she further asked what happened to his books. He told her that all of his books were not missing, they just had to be thrown out because of the flood.

“What about your toys?”, she further questioned.

“Oh no? Your toys didn’t sink? They were all safe [from the flood]?”

“No [that’s not the case]. It’s just because we don’t have toys”, answered Arash with an awkward grin to the volunteer.

Got to hand it to you, the reaction from the boy made us quite stunned and touched.

After the short little interview, they gave Arash some drawing books with colouring and drawing utensils, and he brought them to visit his house which was clearly affected by the harrowing flood.

They then saw him excitedly opening the books given to him and doing the exercises on the books as if he’s diligently working on his homework.

They came back later to his house to give some new toys that they have for Arash and his little brothers.

Arash’s little brother was jumping up and down excitedly when given the set of dinosaurs toys.

“I love this dinosaur!”, mumbled the little kid excitedly.

Their reactions were simply heartwarming to both the volunteers and us viewers, especially if you watch the video above.

The TikTok video had a caption from the organization explaining the video, “Other children told us that their toys were swept away by the flood, but this boy, Arash, has never even had toys, to begin with.”

Netizens were touched to see Arash and his siblings’ reactions to the books and toys.

Some of them wished all the best for this young but mature boy.

However, some also have speculations about why Arash didn’t have toys in the first place. Some assume that this is actually a tough love kinda situation to teach their children to be independent, mature and not rely on things that they do not need.

Whatever it is, we’re glad that these children are well being taken care of by our volunteers.

If you wanna help them too, here’s a link to their website to donate to the emergency flood relief aid.

They changed their name as they go global and help empower youth to give back to the community, either locally or internationally.