The imam was visibly upset as the suspect resists the ritual meant for the dead. 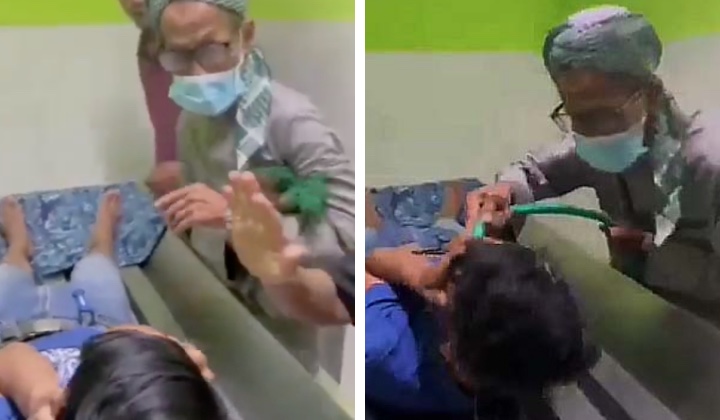 Often when one is guilty of committing an offense or wrongdoing, they will be given a form of punishment for their actions.

It acts as a deterrent so that offenders would not repeat the same mistakes.

But what if punishments deviate from this balance by being too harsh or too soft?

In a video that went viral on social media, a group of people is seen taking justice into their own hands.

The offender is said to have stolen money from the mosque’s coffers and caused the parishioners of the mosque to punish him.

The video is believed to have been recorded at a mosque in Kampung Baru, Kuala Lumpur.

It showed a young man being forced to undergo the Muslim ritual of washing the body before burial.

An elderly man believed to be an imam was seen ‘handling’ the suspect by bathing him with a rubber hose.

The imam also appeared to be angry when he used the rubber hose to scare the suspect, who was forced to lie down on a stainless steel table.

When the suspect was splashed with water and tried to resist, several men acted to hold his head.

At the same time, the imam hit the suspect’s face with the rubber hose several times before covering it with a cloth.

The imam then continued to spray water on the cloth and sprinkled it with camphor.

There are netizens who agree with the action of the imam.

They feel that the punishment is necessary so that the suspect would realize his guilty ways.

However, some netizens said the suspect should be handed over to the authorities for further action.

Malaysian Consultative Council Of Islamic Organization (Mapim) president Azmi Abdul Hamid said Islam teaches its believers to follow the law of the country that they are in.

He pointed out that Islam requires justice for everyone and says that everyone is equal.

If a person breaks a law it is seen as going against the principles and rulings set by the Qur’an and Sunnah .