Netizens didn’t like the fact that Najib labeled the protestors as “terrorists”. 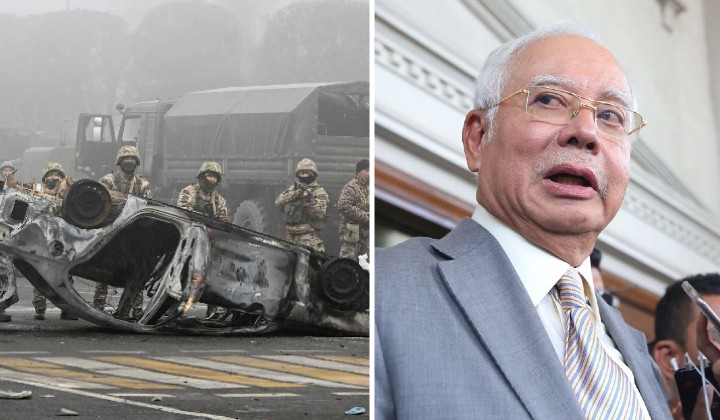 Netizens were not happy with his stance on the matter, especially when Kazakhstan is undergoing political turmoil and civil unrest mainly due to allegations of corruption going on in the current administration.

Congratulations President @tokayevKZ for conducting counter-terrorist operations & restoring order. Wishing your new government success in bringing peace & prosperity to the people of Kazakhstan. May relations between our countries reach greater heights under your leadership.

Congratulations President @tokayevKZ for conducting counter-terrorist operations & restoring order. Wishing your new government success in bringing peace & prosperity to the people of Kazakhstan. May relations between our countries reach greater heights under your leadership🇰🇿🇲🇾

Protestors are not terrorists, netizens say

Malaysians reacted negatively towards the tweet, especially the part where Najib refers to the protestors as terrorists, considering that the Kazakh government has given out the orders to shoot these “terrorists” on sight, according to reports.

2. Najib is damning Malaysia's good name again by siding with his buddy kleptocrats. Labelling the uprise of the Kazakhstan people against its corrupted leaders as terrorists? https://t.co/rGU689oSkX

Others also pointed out that Najib’s support might be due to his family ties with those who run the current Kazakh administration.

The protests over in Kazakhstan stemmed largely from the increase in liquefied petroleum gas (LPG) prices which then turned into a movement that wants to get rid of the current administration that is said to have been riddled with corruption.

After failing to alleviate the civil unrest, the Collective Security Treaty Organization (CSTO) – which includes Russia, Belarus, Armenia, Kazakhstan, Kyrgyzstan, and Tajikistan then came in to contain the situation.

According to reports, these “peacekeeping forces” were sent to Kazakhstan “to stabilize and normalize the situation”.

So far, reports claim that at least 164 people were killed during protests that erupted in Kazakhstan this week with 103 of those deaths coming from the country’s largest city and former capital, Almaty, where demonstrators stormed into government buildings in protest.