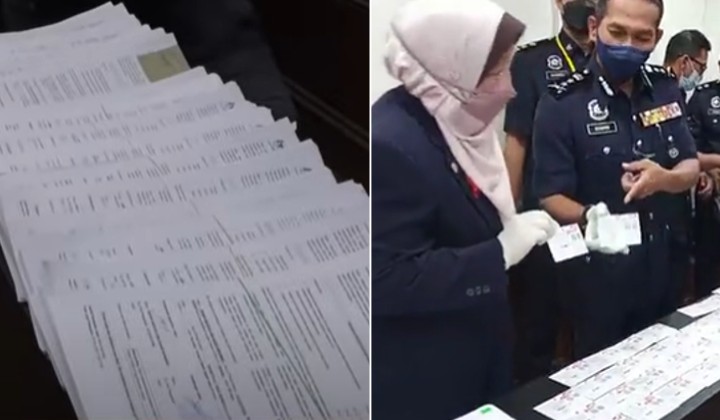 A 51-year-old doctor in Terengganu has been caught by the police for selling fake vaccination certificates.

It’s reported by TV3 reporter Mohd Ishak Abdillah Ngah that around 1,900 certificates worth close to RM1 million have been confiscated by authorities.

Terengganu Police Chief Datuk Rohaimi Md Isa said the suspect is now under police remand to assist in the investigation according to Section 420 of the Penal Code.

These fake certs were believed to have been sold at the price of RM400 to RM500 a pop at a clinic in Marang to anti-vaxxers.

Meanwhile, the police have also confiscated some equipment including laptops, mobile phones as well as related documents, based on reports from Astro Awani.

Rozaimi said that the results of the initial investigation found that the suspect was selling the fake certs online.

He also added that the investigation found that there are customers with addresses in Kedah and Kuala Lumpur.

So far we believe there are more than 1,900 individuals involved in obtaining this fake vaccine certificate and it depends on the review later… maybe half are genuine, half (again) are not. We will work with the Ministry of Health Malaysia (MOH) to evaluate or make an inspection of each MySejahtera which we will trace through the documents (that) we confiscated.