Even though much flooding has subsided, sadness and grief remains for many flood victims. 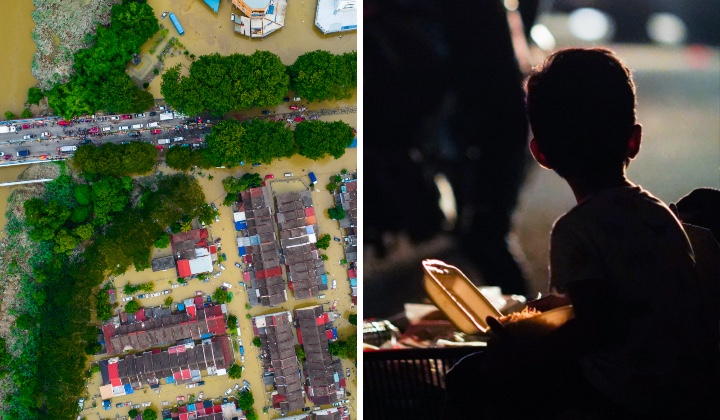 The recent flood disaster in Selangor that destroyed lives and properties is still felt by many.

Among those whose hearts were broken are two families in Taman Sri Muda and Kampung Idaman, Kosmo reported.

The Selangor Bangkit (BSB) assistance of RM20,000 and RM10,000 may help the families financially, but not in coping with the shock of losing their loved ones.

Elly Kong, 38, is still grieving over the passing of her grandmother, Chan Ah Poh, 94, and her aunt, Tan Oan Har, 73, as a result of the tragedy last year.

She said her grandmother and aunt were found hugging each other by firefighters at the victim’s house in Taman Sri Muda on 20 December.

I understand that they both tried to save themselves but failed, as my grandmother was paralyzed from the waist to the feet. Nevertheless, I appreciate the help from the state government.

Kong, who lives in Kota Kemuning, was speaking to the press when met after the BSB handover ceremony at the District and Land Office (PDT) here today.

The flood disaster almost claimed the life of her mother, Tan Wan Ling, 70, who lived in another house around Taman Sri Muda.

Her mother was found in the attic of the house when her husband returned to the flooded area on a boat manned by the authorities.

The attic was built by my father as a shelter in the event of a flood after taking lessons from the floods in 1995.

Elly Kong on the preacautions taken by her family

The same sentiment was expressed by Abdul Talib Kamar, 61, who lost his brother, Yahya Dolah, 67.

Yahya was found drowned inside a house on December 21 after being reported missing by his family members in the wake of the flood.

Anyway, I thank the state government for this monetary aid even though I can’t get back my brother’s life.

The floodwater has since receded, but drained and devastated survivors have much to do in the long cleanup process.

As of 27 December last year, the death toll from Malaysia’s worst floods in years rose to 47, with at least another five individuals reported missing.

State and federal governments have promised help to victims of the flooding.

While the authorities were slow to act, Malaysians from all walks of life stand together as a country and help the flood victims quickly and generously.

At the same time, many of the damages to properties will be not paid by insurance companies.

Meanwhile, several ministers and senior leaders prompted outrage on social media with their handling of the floods.

As fingers are being pointed as to who’s to blame, we all will have a lot to process when the cleanup is over.