In a heart wrenching turn of events, the wife now has to cope with the sudden death of her husband. 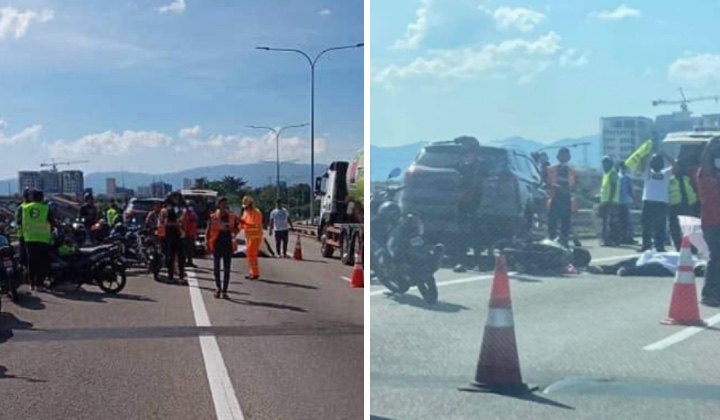 A man’s wish to visit his wife who was treated at a hospital was dashed when he died in an accident.

Harian Metro reported that he was on his way to the hospital when he met a fatal accident at Kilometer 5.7 of the Butterworth-Kulim Highway (BKE) here on Thursday (6 January).

In the incident at 3.30 pm, the 39 -year-old victim died at the scene due to severe head injuries.

He died after colliding with a Proton X70 sports utility vehicle (SUV) driven by a 33-year-old man. Investigations found the accident occurred when the motorcycle collided with the back of an SUV that stopped in the emergency lane.

Accordingly, the driver of the SUV stopped his car for an inspection as the vehicle was said to be damaged.

However, a few minutes later, a motorcycle came from the rear which then hit the back of the SUV, causing the rider to die, said Shafee when contacted by the press.

Shafee added that the dead victim was said to be on his way to Seberang Jaya Hospital (HSJ) to visit his wife who was receiving treatment at the hospital.

According to him, the victim’s body was brought to HSJ for autopsy.

The autopsy report found that the victim died from severe head injuries. The case is being investigated under Section 41 (1) of the Road Transport Act 1987.

Netizens expressed their heartfelt condolences to the victim’s family on the loss of their loved one.

At the same time, some netizens said the accident could have been avoided if the victims had used the dedicated motorcycle lane.

They highlighted that the accident happened on the emergency lane of a flyover where motorcycles are not permitted.