The parents claimed that the child wanted to see the condominium swimming pool. 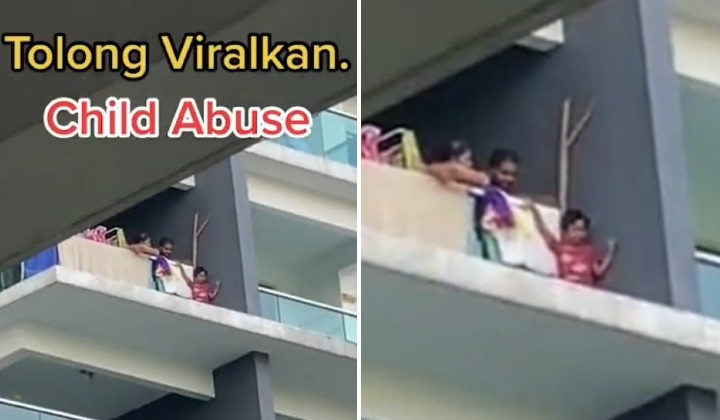 Yet another child was caught on camera on the ledge of a condo balcony, however this time it appears that the kid was put there intentionally.

The video shows a small child huddled in a corner of the balcony ledge while two adults watch from the balcony itself. The child is seen keeping away from the furthest edge and looking back at the adults with a hand on the railing.

The video, posted by Twitter user @hafiznassir, claims that this is an act of child abuse at a condominium in Bukit Jalil, identified at Kiara Residence 2.

Allegedly, the adult had put the child on the outside ledge as a punishment of sorts.

However, the video was reposted onto Twitter by user @luxcysh, who angrily notes that “if you want to discipline a child, don’t kill them”.

Not actually a punishment, but case not closed

The video also caught the attention of the Kuala Lumpur Police, which dispatched officers to the residence for further investigation.

However, the parents of the child denies that it was a punishment of any sort. According to the report, the parents instead claimed that their child, who is younger than 5 years old, was hyperactive and had wanted to look at the swimming pool of the condominium.

The parents also claimed that they kept an eye on the child at all times. After 3 minutes, they coaxed the child back into the home.

The police have opened an investigation under Section 31(1)(a) of the Child Act 2001 for neglect, abandonment, or exposure to harm. If found guilty, the parents could be fined up to RM50,000 or a jail term of 20 years or both.