JPJ said the lorries were en route to inspection at a weight station and not from not illegal logging sites. 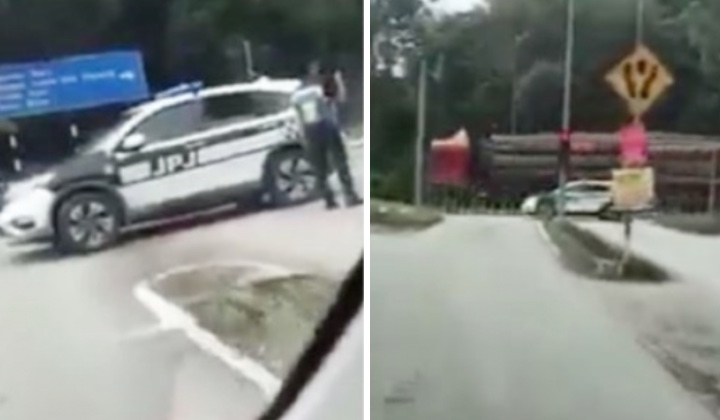 The authorities’ bid to reassure Malaysians that there are no illegal loggings has been picked apart by netizens, many of whom have reacted negatively to a recent viral video.

Netizens, concerned that JPJ was protecting the illegal timber lorries, were enraged and demanded an explanation.

JPJ Said They Were Conducting Operations

In response, JPJ issued a statement saying that it is currently implementing “Ops Khas Lori Balak” which has taken place since 3 January.

Through the Special Operation, the JPJ has detained a total of 30 timber lorries in front of the Gua Musang District Police Headquarters (IPD) and proceeded to conduct inspections.

Meanwhile, the timber lorries are escorted by JPJ for the purpose of ensuring that they do not escape while en route to a weigh station.

The issue of illegal logging became a hot topic recently when wood and timber waste piled in Sungai Telemong, Bentong.

The incident happened after the floods that occurred on 18 December last year.

Some people claimed that the pile of wood waste and logs were caused by illegal forest exploration activities in the area.

In response, the Pahang Forestry Department said the woody debris’ in Sg Telemong was a result of the water-surge phenomenon and not due to land clearing.

Despite the explanation, there are people who remained skeptical due to illegal logging being a much-talked-about issue that had persisted for a long time.

Many of those who witnessed the devastation first-hand also uploaded their own video as they seek for an answer.

Former TV3 newsman, Khaidir Ahmad, also carried out a search mission to determine if there is any other cause of the ‘logging tsunami’ that hit Kampung Sri Telemong in Bentong.

Based on his findings, he claimed that there was logging activity in the area.

At the same time, Pahang Menteri Besar Datuk Seri Wan Rosdy Wan Ismail urged the public not to speculate on the issue since the Pahang Forestry Department had done its investigation.