He gets paid handsomely for driving a tractor, but most of his income goes back to his family 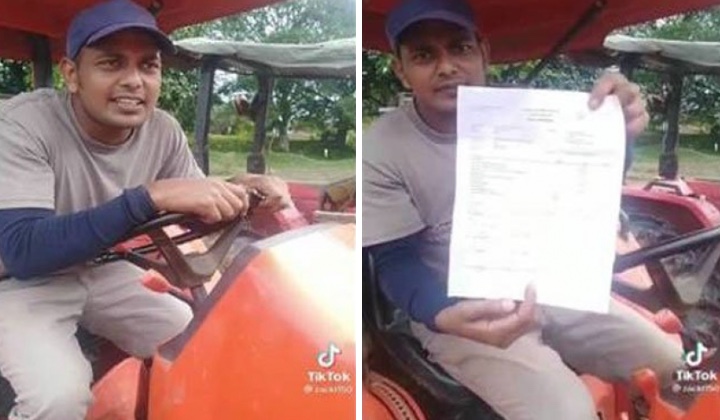 A Bangladeshi worker became viral on social media after a video about him earning up to RM5,000 a month made it to TikTok.

In the one-minute and 14-second video, a man asked the Bangladeshi how long he has been working in Malaysia and the salary he gets each month.

The Bangladeshi replied that he has been working in Malaysia for five years and earned RM5,400 in his last drawn salary.

The Bangladeshi worker on his monthly salary and what he does with the money.

The Bangladeshi man who is still single also showed his salary slip after being asked to show proof.

Based on the payslip dated December 2021, the Bangladeshi whose name is Md. Shamim Ali, worked as a tractor driver at Ladang Mawar in Kemaman, Terengganu.

He earned RM3,497 based on hours clocked (as opposed to a basic salary), with an additional RM1,090 for working on off days.

Md. Shamim pulled in a further RM814 for miscellaneous wages.

After deducting about RM484 including for income tax and salary advance, his net pay is RM4,917.55

However, it is not clear how much he is paid per hour, which means he could have been working like a dog to get that much.

Accordingly, Ladang Mawar is an estate that operates in the agriculture, forestry, fishing and hunting industry.

Md. Shamim’s passport expires on March 2022 but given the pay he is getting, chances are he will renew his documentations to keep working in Malaysia.

Glowing Praise And The Envious Gaze

Netizens praised the Bangladeshi for remitting a large sum of his salary for his family.

The man’s story also attracted the attention of locals and migrants who are also interested in working at the estate.

Not surprising, given that in 2020, the average mean monthly salary in Malaysia was around RM2,900.

With graduates finding it difficult to get jobs, it might not be such a terrible idea, after all, to try out these 3D (dirty, dangerous, and difficult) jobs.