Netizens were fuming over double standard treatment for VIPs. 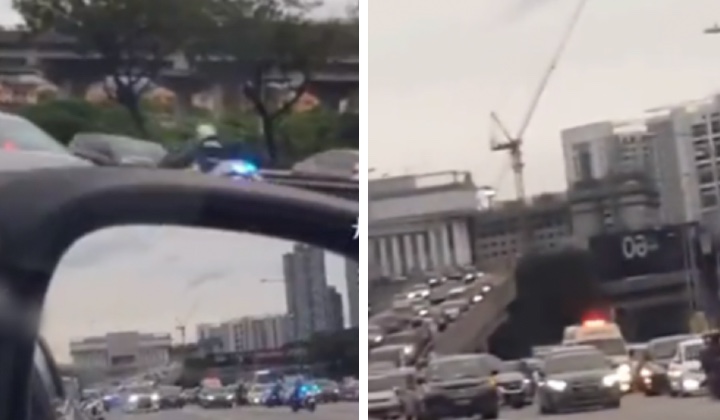 Previously, a video of an ambulance having to stop and give way to a VIP convoy while visiting a flooded area had stirred an online storm.

It drew so much attention because ordinary road users are expected not to get in the way of those providing life-saving services to the public.

People are taught in driving lessons – and it is common knowledge across the board – to give priority to emergency vehicles.

Unfortunately, a similar incident just happened again and was shared by a TikTor user known as @5zonesmy.

The Tiktoker uploaded a video in which an ambulance can be seen as having to give way to a VIP convoy.

It is believed that the incident occurred along the Kuala Lumpur-Seremban Express Highway.

It can be seen that many road users had to stop just to make way for the VIP convoy.

Netizens expressed regret that nothing has changed despite moving into a new year.

They are appalled that the police continue to do something a second time despite the controversy which stemmed from the previous incident.

In December 2021, a video went viral online showing an ambulance being forced to stop and give way to VIP vehicles.

The preferential treatment drew much criticism from netizens, who are indignant at the double standard.

The people pointed out that holding up an ambulance could literally mean the difference between life and death.

The police, which shoulder a lot of the blame, had to come out and explain.

READ MORE: We Had To Stop The Ambulance To Avoid A Collision, Says Selangor Traffic Police

Meanwhile, there are those who said that one does not always have to give way to ambulances, even if there are flashing lights.

In fact, ambulances, while having priority over everyone else so that it reaches hospital safely and as fast as possible, have to adhere to certain rules.

Hopefully the police will be more alert, road savvy and caring towards ambulances the next time they lead a VIP convoy.