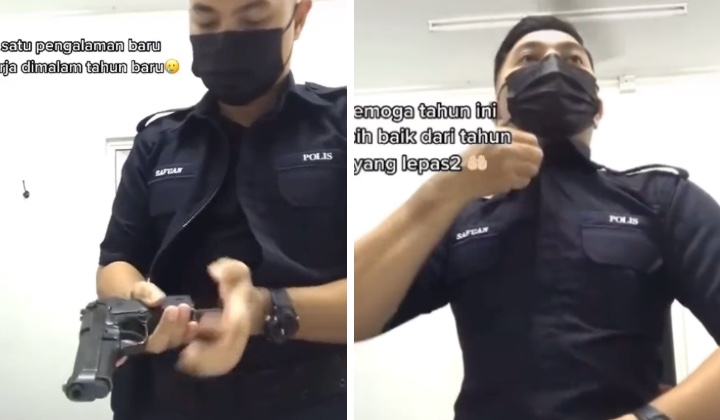 A video had gone viral on social media showing a policeman getting ready before starting his job on New Year’s Eve.

The video was uploaded on the TikTok platform before being shared by a Twitter user known as @Tsgxy_.

In the video, it could be seen that the policeman was getting ready by wearing a face mask and uniform before starting duty.

However, what caught the attention of the netizens was his display of a firearm.

Regretting the actions of the policemen, the Twitter user said the policeman’s action would only bring negative repercussions.

Steady dik (little brother). Are the fingerprints dried yet? If action is taken, don’t say it’s cruel. You’re looking for trouble. The most gun-toting police in Malaysia.

Twitter user @Tsgxy_ giving his piece of advice to the policeman.

Netizens also began to question the ethics of the policeman.

In fact, some even reminded that the men in blue are not allowed to make videos like this, especially showing off firearms.

Netizens asked the policeman, what kind of police are you?

Others told him to wait for disciplinary action.

Following the recent floods, much public anger has understandably been directed at police forces.

READ MORE: Police Were Late And Decided To Have Breakfast First, Flood Victims Made To Wait Longer

The new year also started off poorly for the men in blue with recent negative publicity surrounding police.

Hopefully, the matter will be addressed with a view to promoting and limiting damage to police departments’ reputations.