The makcik said that 9 families were forced to camp there because of the floods. 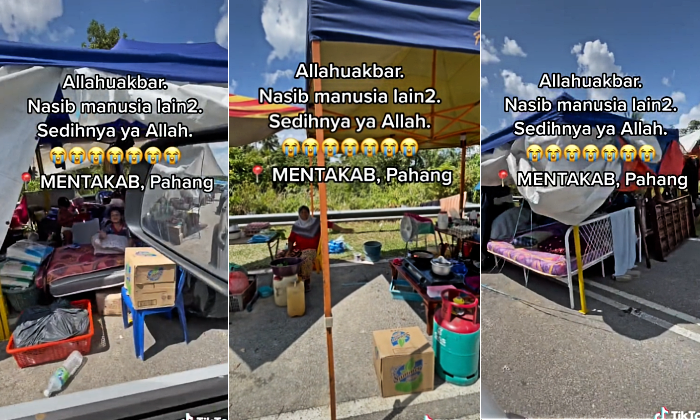 A video that’s making waves online shows just how much devastation and disparity the nation’s annual flood disasters have cost the rakyat.

Footage shared by TikTok user and flood relief volunteer, Zhafri Hassan, shows what can only be described as a “climate refugee camp” set up by the side of what appears to be a highway or a main road believed to be in Mentakab, Pahang.

The 54-second clip, captured from the passenger side of a vehicle that was passing by the campsite, placed several flood victims taking refuge in makeshift tents together with their beds and other belongings that they supposedly managed to save from the floodwaters.

“We moved by ourselves. Nine homes altogether,” answered a woman in the video when asked why she and the others were there.

Apparently, she and her neighbours were forced to evacuate to the campsite all on their own, and have been taking shelter there ever since.

“Some are staying at their kid’s place, but for us, this is it,” said the ‘makcik’, explaining that this isn’t the first time that they had done this.

“Whenever it floods, this is the place for us.” the makcik continued before the video proceeds to show how other families with children were living under similar circumstances.

The video, naturally, had netizens feeling a wide range of emotions: shock, sadness, anger and an overwhelming sense that something isn’t right.

“I feel terrible sleeping soundly in a comfortable house. When there are people sleeping on the roadside like this,” cried one Twitter user.

Some even took shots at Prime Minister and Bera Member of Parliament (MP), Datuk Seri Ismail Sabri Yaakob, for letting the people in his home state live in such deprived conditions.

“I can’t believe that our PM is a Pahangite,” wrote one commenter.

A few people had also asked why the people seen in the video didn’t seek shelter at a government flood-relief centre (PPS).

Providing an explanation, one commenter wrote that some flood victims would try to avoid going to shelters over fears that their homes might get robbed and that they had no place to store their belongings safely at a PPS.

The man also described that some people prefer not to stay at a PPS because of its crowded conditions.

Providing some extra details on Instagram stories, Zhafri explained that he recorded the video on Saturday (25 December).

When he returned to the area the following day, the makcik had already moved out of the campsite and back to her home.

According to one news report, the 10,000-hectare town of Mentakab was left submerged in a sea of “teh tarik” coloured floodwaters on 19 December.

More than 30,000 people were said to have been evacuated to 245 PPS across the state.