The pilgrims waited for hours for KKM to install digital tracking devices on them. 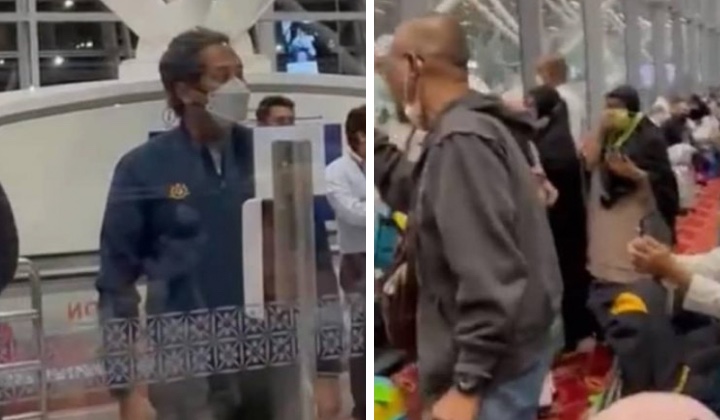 A TikTok video captured heated moments at the Kuala Lumpur International Airport (KLIA) involving pilgrims who had just returned from performing Umrah in the Holy Land.

In the 34-second video uploaded by user Zulkifli Mohamed, it appears that Health Minister Khairy Jamaluddin was also recorded in the video which has gone viral.

Zulkifli claimed that the commotion was due to an incredibly long wait endured by the pilgrims upon arriving at KLIA.

He said the Ministry of Health Malaysia (KKM) is supposed to install digital tracking devices for the pilgrims.

Zulkifli said the pilgrims lost their patience after waiting more than 5 hours for KKM to install the digital tracking devices.

The standard operating procedure (SOP) is nonsense, we waited to wear a tracker watch but the government is not ready… so everyone is upset.

TikTok user Zulkifli Mohamed on why the pilgrims were angry

Others said the long wait is due to the lack of manpower.

They said authorities should be considerate, given the long hours of the flight and a large number of pilgrims coming back.

Some noted that SOPs at airports is pointless as people will be sitting next to each other on the plane anyway.

Khairy in a press conference last Saturday informed Malaysians returning from Saudi Arabia will be required to wear digital tracking devices throughout their home surveillance and quarantine periods.

This is in light of the increasing spread of the Covid-19 Omicron variant in Malaysia.

According to him, the implementation was made following that 30 of the 49 Omicron variants in Malaysia detected on 23 and 24 December were import cases from Saudi Arabia.