He was on trial for multiple cases including rape but managed to flee from custody. 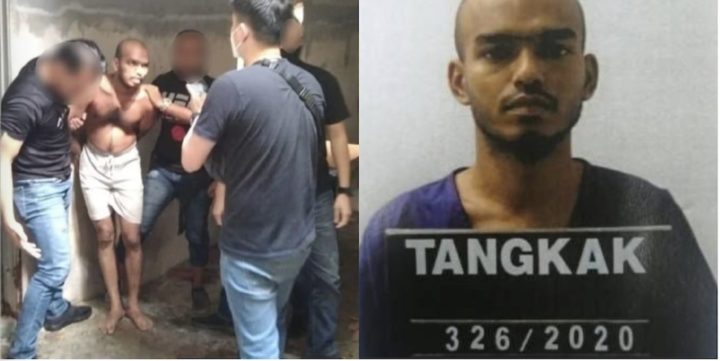 After being on the run for weeks, the police have nabbed Abdul Hamim Ab. Hamid or better known as ‘Long Tiger’.

He was hunted by the police for managing to escape from Tangkak Magistrate’s Court lockup in Johor through the main gate of the court on 15 December at 11.55 am before the trial began.

The 32-year-old Rohingya man was brought to court along with three other suspects – aged 36, 38, and 46 who are believed to be involved in providing protection to Long Tiger.

The four of them are now remanded for four days starting today until 1 January, based on reports from Utusan.

A week after his escape, on December 22, a local couple aged 41 and 43 were arrested by the police for connections related to Long Tiger.

Meanwhile, two of the four policemen who were directly involved in the negligence aspect that allowed Long Tiger to escape, are now under suspension until the end of the appeal process before further action is taken.

Finally arrested by the police

According to reports, after 13 days in hiding – ‘Long Tiger’ was finally arrested by the police yesterday (28 December).

It is understood that the suspect was arrested during a special operation conducted by the police in Kuala Ketil, Sungai Petani, Kedah.

A Bukit Aman police team and the Criminal Investigation Department (CID) of the Johor Contingent Police Headquarters who conducted intelligence received information that Long Tiger was hiding in a house.

Prior to his arrest at about 3 pm, the suspect tried to escape authorities by climbing the roof but slipped and he fell on the kitchen floor.

Acting on the information, a police team rushed to the house but the occupants refused to open the door and at that time Long Tiger was seen climbing the roof to escape. Policemen had to break down the door and ordered Long Tiger to come down from the roof but he slipped and fell.

Reports from MalaysiaKini state that he was put on trial for rape, criminal intimidation, and wrongful confinement of a former worker.