In 2021 Malaysians together survived a plague, hustle through an economic crisis, sat through another government change and help each other out when no one else would. 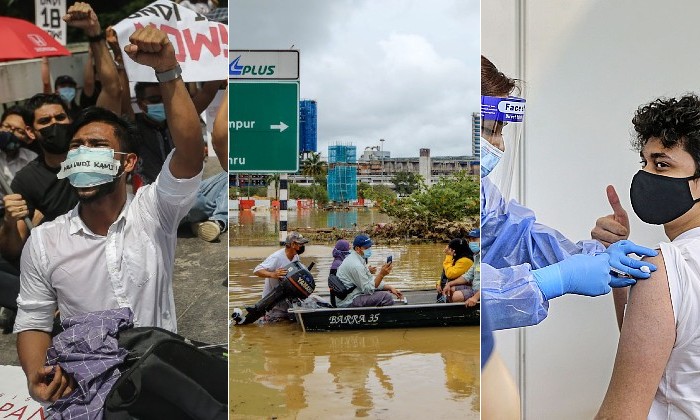 If 2020 was the year that changed everything, then 2021 was definitely a thrilling sequel to our episodes spent living here in our home Malaysia.

Throughout the season, we survived a plague, hustle through an economic crisis, sat through another regime change, and time and time again: felt overwhelming pride and patriotism by how regular, everyday denizens came together to lend more than a hand to brace each other up in the face of the year’s trials and tribulations.

So as 2021 comes to its finale, TRP brings you our quick recap reel of the humour, heartbreak, horrors and happenings of the year (depending on how you see it) – in no particular order.

From irrelevant celebrities to local and law enforcement officials, to politicians and government ministers – the rakyat won’t soon forget the countless times when the country’s supposed VIPs were either caught, accused of, charged or had their cases declared as “no further action (NFA)” for violating Covid-19 standard operating procedures (SOP).

In September, Home Minister Datuk Seri Hamzah Zainuddin reportedly told Parliament that there were a total of 56 politicians who’ve been arrested for breaking SOPs – only one was charged in court, 22 got summons, 25 cases were apparently still under investigation at the time and eight cases were classified as NFA.

2. The economy, unemployment and wages

The Covid-19 crisis had inevitably crippled the nation’s economy, caused businesses to either stall or close their shutters for good and culminated in one of the worst cases of mass unemployment and the lowest wage levels seen in decades.

3. The end of pandemic lockdowns

For over a year Malaysians spent our days stuck in periods of lockdowns, movement, and travel restrictions as well as not being able to head on over to McDonald’s after midnight for a bite to eat because of the Movement Control Order (MCO).

However, Malaysians gained some sense of normalcy in August following the announcement of the National Recovery Plan (NRP), two months prior.

The plan was put in place to jump-start the nation’s economy and propel the country to reach the “endemic” stage of the Covid-19 crisis. This was done as soon as 80% of Malaysia’s adult population were vaccinated. We’re currently at the final stage of the NRP.

Read More: There Are 4 Phases Planned For The Country To Recover From Covid-19
Read More: Sectors Reopening Because Of Economy, Not Because Its Safe, Says Health DG
Read More: We’re Ready For The Endemic, Says Health DG After Malaysia’s Covid-19 Situation Improves

Disruption to clean water services in Selangor had arguably and unfortunately became the norm for most of Darul Ehsan’s denizens as a result of pollution at the state’s main rivers and water supplies.

Because of this, the government is, at the least, planning to introduce laws that would properly punish criminals who cause pollution and water disruptions.

In August, Malaysia’s caretaker Prime Minister Tan Sri Mahiadin Md. Yasin and his Cabinet of Ministers were forced to resign after the former failed to gain majority support in Parliament.

Ismail Sabri’s administration saw the return of familiar faces to the Cabinet who had either taken on similar or different roles altogether.

After the bill was passed in 2019, Malaysian youths claimed victory when the Kuching High Court ruled that the Undi 18 law, which would lower the voting age from 21 to 18, should be implemented by 31 December 2021.

Although there was initially some setbacks, the government and the Election Commission (EC) have taken steps to ensure that its implementation, along with the instalment of an automatic voter registration system, was gazetted on 15 December.

7. For our mothers and daughters

Malaysia claimed another victory when the Kuala Lumpur High Court ruled that Malaysian mothers now have the right to grant citizenship to their children born abroad.

Despite pushback from the government to overturn the decision – with the argument that it was a matter of national security – the Courts remained firm with their decision to pass the law which will allow both men and women to pass down Malaysian citizenship to their offspring born overseas.

The Covid-19 vaccines were finally made available to the public under the National Vaccination Program (PICK) in February, in three separate phases: starting with getting frontliners and essential service workers inoculated first, followed by the elderly, then continuing with the rest of the population aged 18 and above.

Teenagers between the ages of 12 and 17 were soon added to the vaccination phases while children under the age of 12 will soon receive their shots beginning 2022.

Despite stories of people jumping the vaccine queue, individuals refusing to take the shots and a slow start to the inoculation race, as of December, a total of 25,596,683 denizens have been fully vaccinated while 17% of those inoculated have already gotten their 3rd booster shots.

Read More: Want To Get Vaccinated? Here’s All You Need To Know About The National Covid-19 Immunisation Program
Read More: After Reports Of VIP Vaccine Queue Jumping, Govt Releases Official List Of Eligible Frontliners For Phase 1
Read More: Nationwide Infection Rate Is Down, Vaccines Up But Still A Long Way To Go
Read More: “Call Me Dajjal But I’m Going To Do My Job” Health Minister Fires Back At Antivaxxers

9. Flags of friendship and freedom

Feeling that the government had forsaken them, the rakyat rallied again under the banner of the #RakyatJagaRakyat movement to aid each other and voice their frustrations towards the handling of the Covid-19 crisis.

Malaysians mobilised to form several flag-based campaigns to signal the alarm and send help without any government support when someone needed financial or food assistance (white and purple flag) or supplies and medical aid for their pets (red flag).

Some techno-savvy Malaysians even developed mobile phone apps to help spread the cause and get aid where it’s needed quickly.

Black flags were flown by citizens to protest the government’s incompetence and demanded for the PM of the time (Mahiadin) to step down, for Parliament (which had been shut down for months due to the pandemic) to reconvene and for the State of Emergency declared in the wake of the Covid-19 crisis to end.

Parts of the country were hit with devastating floods that lasted for days at the end of 2021 following non-stop heavy rains in the Klang Valley and the state of Selangor, Pahang, Melaka, Negeri Sembilan and Terengganu.

48 people were (so far) confirmed dead while thousands were forced out of their homes in search of safety.

Those affected by the floods and Malaysians who saw the events unfold were beyond frustrated over the government’s lack of warning and preparation in face of the floods as well as with post-flood relief efforts – that were deemed lacking and unorganised.

We again saw Malaysian citizens, foreigners and even refugees coming together to not only rescue those who were stuck in the floods but provide assistance and assurances to victims of the tragedy.

Malaysians also rallied against giving out donations to the government and its agencies and encouraged the rakyat to channel their aid to non-government organisations (NGOs) and directly to victims instead.

It is said that the recent floods may amount to a minimum of RM20 billion in damages that were done to private homes and property, businesses, industries and the nation’s infrastructure.

Prior to the most recent floods in December, the nation was already hit by several similar natural disasters in Kelantan, Pahang, Perak, Terengganu, Johor, Sabah, Sarawak and Selangor in early January and between the months of August and October.

Read More: Major Flood Once Every 50 Years: How The Recent Flood Stacks Up Against Previous Catastrophies
Read More: Government’s “Failed” National Preparedness Month Bashed By Netizens In Wake Of Floods
Read More:Malaysia’s Armed Forces Joined Flood Relief Efforts Without Approval
Read More: ‘DO NOT DONATE HERE’ Trends When Netizens Urge Others Not To Donate To Govt Agencies
Read More:Govt Was Warned About The Floods Since July, But They Just Completely Ignored It
Read More:Pahang Floods Were So Bad A 19th Century British Shipwreck Was Raised From The Sea
Read More:Anwar Blasts Takiyuddin’s “Act of God, Not Logging” Comment On Kedah Floods

Malaysian doctors took part in the #HartalDocktorKontrak movement that took place at public hospitals nationwide and elsewhere across the country by participating in a mass ‘walk-out’ in solidarity and protest to the government’s treatment of its contracted medical officers.

They demanded that the government provide better working conditions for its personnel and further improvements to the country’s healthcare system.

Plans for another protest is in the works as many see that the government has done little to fix the problem.

Read More: Malaysian Doctors Protest Despite Being Warned Not To
Read More: Doctors At MAEPS Interrogated By Police Till 4AM For ‘Hartal’
Read More: Hartal Doktor Kontrak 2.0 Protest Soon, Movement Says Budget 2022 Not Helping Contract Doctors At All