Thankfully his neighbours and family members living nearby came to help. 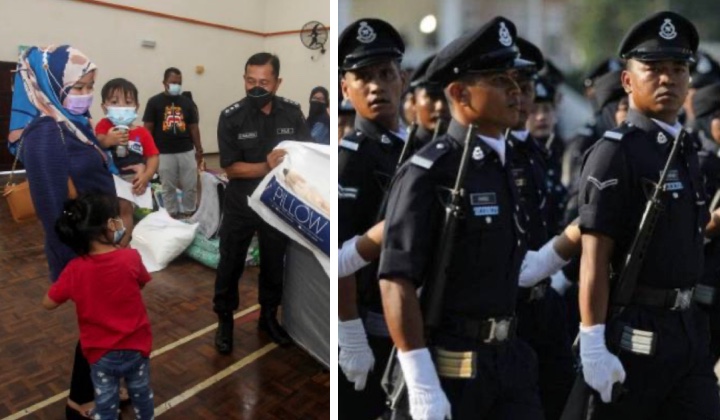 The wife and children saved themselves from the floods with the help of family members and neighbours, while the husband was on duty to manage the flood victims at the temporary evacuation centre (PPS).

That was the experience of a policeman from the Dengkil Police Station, Corporal Muhsen Bujang, 34, according to Utusan Malaysia.

He was unable to be there to help his wife and three children aged 10, 8 and 2 years when their house in Kampung Cemperai, Dengkil was flooded.

Recounting the experience, Muhsen said, during the incident, he was at PPS Taman Gemilang, Dengkil to manage flood victims in the housing area and the village on 18 December.

Corporal Muhsen Bujang recalling the moment his family needed him

Fortunately, there are in-laws living nearby as well as neighbours and friends helping to move important things.

Muhsen spoke to the press during the flood donation presentation by officers and members of the Sepang District Police Headquarters (IPD) recently.

The officer, who hails from Sarawak, said his two cars and his family were rescued, but the motorcycle and other items including important documents were submerged in water.

The level of damage, including goods, can be said to be 90 percent because the water is very high about eight feet. We have returned home, but have not cleaned it completely, we only had time to clean the place to sleep first.

Corporal Muhsen Bujang on the losses suffered by his family

For now, he and his family are staying overnight at a house in Desa Pinggiran Putra.

Muhsen added that his neighbourhood is indeed a flood-prone area and there have been four floods already this year, but none as bad as the recent one.

Wan Kamarul Azran thanked members of the public, private companies as well as non-governmental organizations (NGOs) for their contributions.

They live in Kampung Cemperai and Kampung Labu Lanjut as well as outside the Sepang district, namely Telok Panglima Garang and Bukit Changgang, Kuala Langat.

We managed to raise RM12,500 and distributed it to 39 officers and members involved. We also received donation in kind such as mattresses, pillows, sheets, kettles as well as food and beverage items.

Wan Kamarul Azran thanked members of the public individuals and private companies as well as non-governmental organizations (NGOs) for their contributions.

He added that all police personnel affected by the floods were also given leave.

Meanwhile, it had been reported that 632 families of police personnel were affected by the floods.

Police administrative areas in North Klang, Shah Alam and Kajang are among the most affected, including the Taman Sri Muda Police Station in Section 25, Shah Alam.