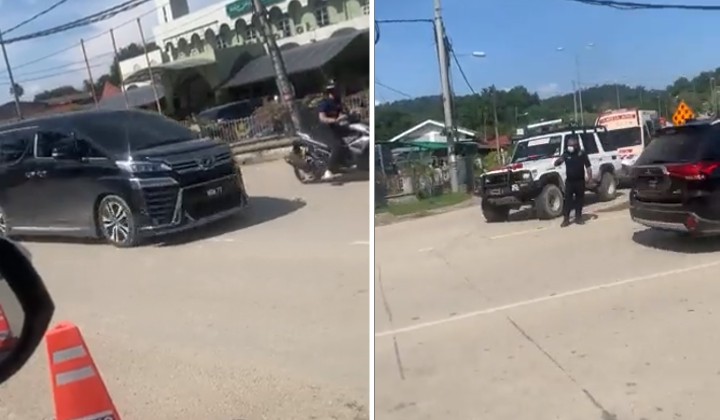 After a video went viral online showing an ambulance being forced to stop and give way to VIP vehicles, the police has come out with a statement saying that it was done to avoid an accident.

Selangor’s Head of Traffic Investigation and Enforcement Department (JSPT) Supt. Azman Shari’at said that the distance of the lead vehicle was close to the intersection and the action was taken by the police to avoid the lead vehicle from colliding with the incoming traffic.

He said that the decision was made by the traffic personnel was in accordance with the provisions under Traffic Rule No. 9 LN 166/1959 of the Road Transport Act 1987.

In the situation shown in the video, if traffic members at the intersection give priority to 4×4 drives and ambulances belonging to the Red Crescent Society that want to exit the junction to the main road, it is an action that will create the risk of accidents and endanger road users. Therefore, the convoy on the main road has been given the priority route to avoid accidents in addition to taking into account the initial assessment that has been carried out by the traffic personnel.

Recently, a short video surfaced online showing a 4×4 vehicle and an ambulance belonging to the Red Crescent Society was ordered to stop at a road junction to give way to a convoy escorted by the traffic police.

Azman said the incident happened on 26.12.2021 at about 11.30 am when the Prime Minister of Malaysia’s entourage was on its way to see for themselves the clean-up work carried out by various agencies to help flood victims from ‘Taman Sri Nanding, Hulu Langat to another location at Al-Mustaqgim Mosque, Batu. 16 Hulu Langat accompanied by the traffic police.

All officers and members of JSPT are always instructed to give priority to emergency vehicles such as carrying patients and members on duty at the intersection have made a preliminary assessment before stopping the two vehicles for a short period of time.

He added that as soon as the convoy passed the intersection in a short period of time, traffic officers took immediate steps to give priority to the ambulance and 4×4 vehicles after there was no risk of an accident.

At all times, JSPT’s priority in carrying out traffic assignments is to give priority to emergency vehicles, especially for ambulances and firefighters.