Thousands of tons of waste are being cleared from Selangor’s flood-hit areas. 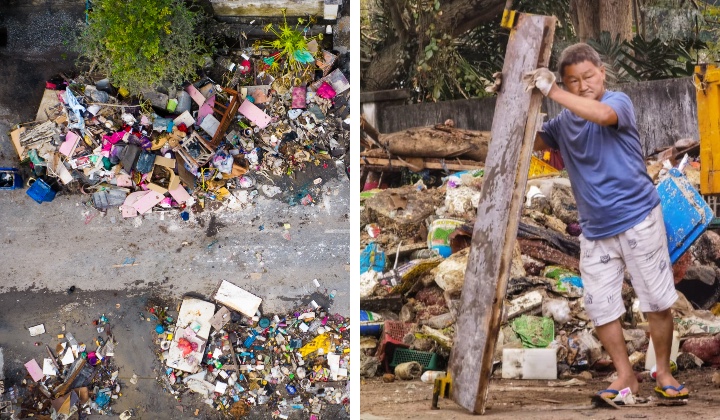 Floods have large social consequences for communities and individuals.

As most people are well aware, the immediate impacts of flooding include not just loss of human life but also damage to property, which in turn leads to the problem of waste management.

After the water subsided from the recent devastating floods, a survey by The Rakyat Post on the ground at Taman Sri Muda found that vehicles, household waste, furniture and electrical appliances lined the streets.

Fridges filled with yesterday’s grocery shopping, washing machines and sofas piled up, along with books, photo albums and records, all coated in a thick layer of oily mud.

Removing the unprecedented mountains of waste is a big challenge as residents begin to move on in life, including with help from volunteers.

Waste from the streets need to be removed quickly due to growing hygiene concerns and because it was obstructing vital traffic.

Do Not Burn Flood Waste: Fire And Rescue Department

In response, the Selangor Fire and Rescue Department (JBPM) has advised the public not to burn the piles of flood waste.

Its director, Norazam Khamis, said two cases of bulk waste burning had been reported in Kapar since Saturday.

Norazam was quoted by Sinar Harian as saying that the operation room received a report on flood waste burning that happened at Taman Meranti Mewah around 5.50 pm on Sunday.

The first machinery from the Kapar Fire and Rescue Station (BBP) arrived at the location at 5.57 pm and found that the fire involved a pile of rubbish and damaged furniture at the location which is estimated to be 278 square meters.

The fire was brought under control at 7 pm and the operation ended at 7.40 pm.

The incident did not involve any victims, said Norazam.

Meanwhile, the state government has opened 11 temporary evacuation stations (PPS) for bulk waste to expedite the cleaning process after the floods.

The Selangor state government is requesting the cooperation of all parties involved in the post-flood clean-up operation in Selangor to dispose of bulk garbage at the designated TS.

In a statement, Selangor executive councillor for local government and public transportation Ng Sze Han said all the TSs are equipped with bulldozers and excavators.

The state government has been informed that rubbish has been dumped in public areas such as roadside or areas that are not in the zone under the TSs. The situation complicates as well as delays the clean-up work at the affected locations.

He explained that KDEB Waste Management or the local authority (PBT) has to clean the area and in turn will delay the waste cleaning operation after the flood.

Therefore, the state government hopes that all parties can work together to dispose of rubbish after the flood in the nearby TS.

Alternately, they can send rubbish directly to the Tanjung Dua Belas, Kuala Langat and Jeram landfills.