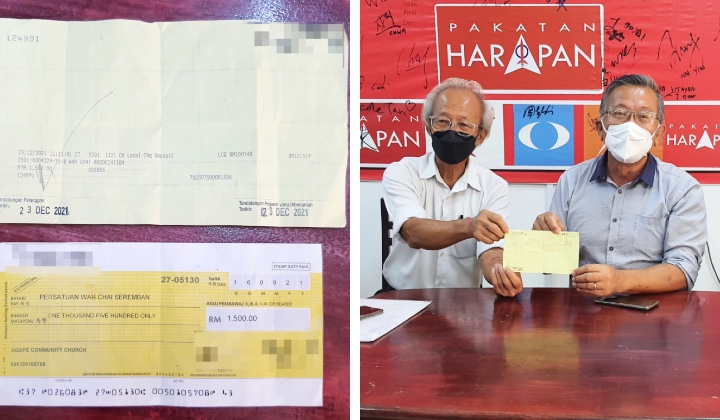 As members of the public come forward to help flood victims, the last thing that people would expect is their help being blocked or hindered.

And yet, that is exactly what happened to a church when its cheque was rejected by Bank Muamalat in Seremban as it was deemed “not halal”.

Sin Chew reported that the issue came to light when a Seremban-based Chinese charity group, Wah Chai Association, tried to deposit a Maybank cheque for RM1,500 at Bank Muamalat.

The cheque was issued by the Agape Community Church to pay for remedial works at Lee Sam Road Chinese Cemetery in Seremban.

Because the bank did not have a checking machine, they tried to deposit the cheque over the counter.

In a press conference held on 26 Dec, Lobak state assemblyman Chew Seh Yong said the bank informed the association that the cheque could not be accepted on grounds that it was “not halal”.

The association then sought the help of Chew, and he accompanied its members to the bank on Thursday (Dec 23)

They tried and deposit the cheque again, but the cheque bounced again and the same reason was given – that the cheque was “not halal”.

Not giving up, Chew continued to engage the bank employees. After a discussion, the bank’s headquarters gave instruction to accept the cheque, citing “technical error” for earlier rejections.

Curious, Chew also asked the bank employees again why the cheque was rejected in the first place.

After several employees saw the name of the church printed on the cheque, they said unanimously that the bank would not accept it. Even if they went through the formalities again, the cheque would still be rejected. I repeatedly asked the reason. A supervisor came out to receive it and whispered that the cheque was ‘not halal’.

Chew said there should be no distinction between halal and non-halal cheques especially when Prime Minister Datuk Seri Ismail Sabri Yaakob had promoted the concept of Keluarga Malaysia.

At the same time, Chew does not believe that it is the bank’s policy.

He blamed it on the bank’s little Napoleons and urged the bank to carry out internal investigations to avoid a recurrence of the incident.

The incident was also highlighted by netizens, including lawyer and activist Siti Zabedah Kasim or better known as Siti Kasim.

GILA!! A cheque issued by a church was rejected by Bank Muamalat in Seremban, Malaysia, twice as it was deemed non-halal as it was issued by a Church. Stupid bank, stupid ppl. We should hv Halal & Haram money. See how these stupids survive. pic.twitter.com/89Pl5SRiEi

Some netizens feel that the matter had been blown out of proportion.

Twitter user @Thinker09441141 described the person who brought up the issue as crazy.

The racist mind should be stopped. This is normal bank policy, which may not be understood by customers and the matter can be resolved without any fuss. Just a simple explanation and conversation can resolve the matter.

Some put the blame on the bank officers handling the cheque.

Seriously something wrong with the bank staff. There are actually very clear banking guidelines of circumstances in which cheques can be rejected and I'm certain that halal or haram is not one of them

Another Twitter user, @chiafook2013, said the bank could land itself in trouble.

Rejecting a bona fide cheque twice! Any smart lawyer can make money by suing the bank on behalf of this client.

At the same time, many expressed disbelief that cheques can be categorised into “halal” and “non-halal”.