Abang Viva did not grow weary of doing good, taking full opportunity to serve all those in need. 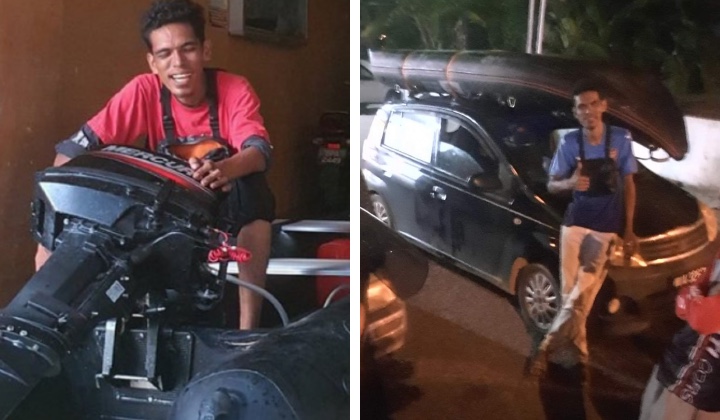 Abang Viva or real name Azwan Omar is now viral and has become the focus of netizens on various social media sites.

It all started when a Perodua Viva was driven by Azwan while carrying out his mission to rescue and aid flood victims.

Twitter user @UsharDaniele uploaded a tweet asking for Azwan’s phone number because it is understood that Perodua is looking for him.

Most people are of the view that Perodua should give him a new car as a reward.

After all, he has done a lot to save and provide assistance to flood victims.

However, there is still no official statement and announcement issued by Perodua on the matter so far.

Meanwhile, Azwan has also been helping out in Temerloh in his mission to help flood victims affected in the district.

Previously, Azwan had caught the attention of many with his willingness to journey from Melaka in a Perodua Viva to help the flood victims.

Even more amazing is that he travels with a boat on top of his car.

Furthermore, he started his journey with only RM20 as fuel for the boat and RM30 to buy food for flood victims.

Someone Who Draw Others To Do Good

Photos and videos of Azwan carrying out a mission to rescue flood victims and send aid have also been uploaded by many netizens who came across the young man.

His selflessness in loving other people offers much needed hope at a time when people are disillusioned with politicians for failing to help and their seemingly lack of empathy.

READ MORE: Are Politicians Fooling Themselves Into Believing Their Own Spin?

Azwan is certainly not alone in being patient, kind and putting others first.

Selfless service are pouring in, stemming from a long-standing conviction that we are all members of one large family.

Despite challenges and obstacles, it did not stop Malaysians from feelings of care and concern for all people.

This is the kind of sacrificial love that we all should strive to extend to others; unconditional love.