With the political leadership hardly initiating any visible steps to put things in order, resentment is brewing among the people. 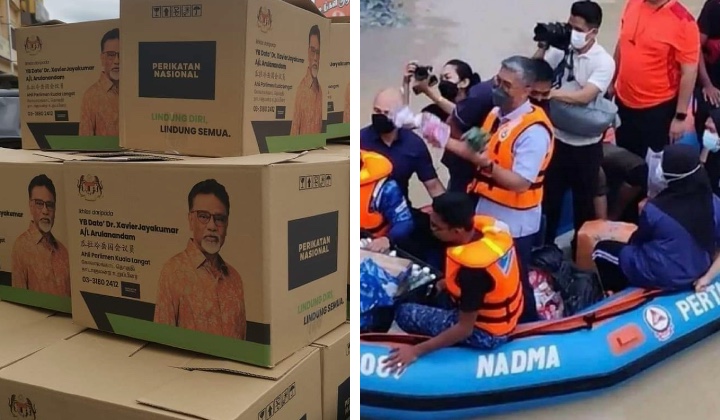 Is it true that politicians are hypocrites who often present falsehoods for career survival?

The people had been expressing their feelings and reactions through social media on the various behaviors and actions of the country’s politicians when faced with the floods.

They have uploaded and shared a number of videos that, among others, show the negative reactions of flood victims towards ministers visiting the affected areas.

The people can also be seen expressing their frustration and or delivering hard-hitting criticism of the government’s rescue efforts.

Among the videos were those uploaded by Twitter user @Farid Reduan, who apparently recorded his video in Bukit Changgang, Selangor.

The video showed a convoy of official government cars escorted by police passing several individuals resting in a blue tent.

A woman in the tent then made cynical comments about the convoy.

Thank you, to the many of you. Wow, many (cars) came to help the flood victims. Tomorrow the flood has receded, come again yes… bye.

A woman’s comment to a passing convoy of VIPs

Where Is The Government In Times Of Disaster?

Another video was uploaded by a television journalist, which showed a senior citizen known as Pak Din at a temporary evacuation center (PPS) at SK Teluk Gong in Klang, Selangor.

After the reporter said there was a shortage of food and water supply, the man was seen scolding at the top of his lung against someone (not in the footage).

We can only expect help from good samaritans. Where is the government? What is your responsibility? We chose you to manage our administration and security. Where is the National Security Council? Where is the Social Welfare Department?

Senior citizen Pak Din berating the government for its incompetence

The woman was heard as saying that her house was in a higher area and the area on the inside was more severely affected.

The Government was in total paralysis, clearly too disorganised to respond quickly to the flood disaster that left thousands of people without any safety net, when they needed it most #DaruratBanjir pic.twitter.com/uQfSalJN15

Looking At The Onlookers And Bystanders

Meanwhile, a video uploaded on TikTok showed Finance Minister Tengku Datuk Seri Zafrul Tengku Abdul Aziz on a boat and heading towards the roof of a flooded house.

The boat was full of other people and the person recording the video claimed it was filled with ministerial officials, security guards and cameramen.

Did he went to help someone? It looks like he needed the most help just to get off that fully loaded boat.. pic.twitter.com/8h548WTJ4I

Why Politicians Must Print Their Face All The Time?

There was also a picture uploaded on Twitter user @CenPolo, which showed a number of donation boxes printed with the Perikatan Nasional (PN) logo.

Also printed on the boxes is the face of Kuala Langat MP and former PKR vice-president, Datuk Dr. Xavier Jeyakumar.

Help is slow because need to wait for the box (to be printed) with the logo. No wonder.

There Is Hope, After All

While some politicians can make the people feel depleted and taken advantage of, there are still many who really find happiness in helping others.

Among them are a bunch of youngsters gathered by the Malaysia United Democratic Alliance (MUDA).

They had been going around in Selangor, knocking on doors and asking flood victims if they need help with cleaning up.

So far, in Selangor, they have been doing cleanup in several places including Bukit Launching, Bestari jaya and Taman Sri Muda.

Hopefully this will be a catalytic effect for young people to seek solutions, take action to help the rakyat and, collectively, advance real, meaningful change.

MUDA coordinator Zayd Shaukat to TRP on the volunteerism by youngsters

An elderly resident in Taman Sri Muda, James Ong, commended the youngsters for their initiative.

Ong, who had been living in there since 1986, said the youngsters can be the driving force for change in society.

My family have been cleaning the house for three days and it’s still unfinished. Thankfully the youngsters from MUDA came along. I hope it will inspire more Malaysians to help out, as so many houses are in shambles.

Taman Sri Muda, James Ong to TRP on the help from MUDA

Any Sensible Person Acts With Knowledge

At times, social media can contribute to political misperceptions because information flowing across them could be inaccurate.

Often we’re so busy thinking of what we want to say that we don’t listen as much as we’d like.

But at the end of the day, if the rakyat are making noises, its because they want to hold the politicians accountable for the benefit of everyone.

If the politicians’ thinkings are spot on, their implementations work, and their words are good, no one would raise the issue of accountability.