With uncertain times ahead and difficult choices to make, authorities are urged to be more humanitarian in their approach. 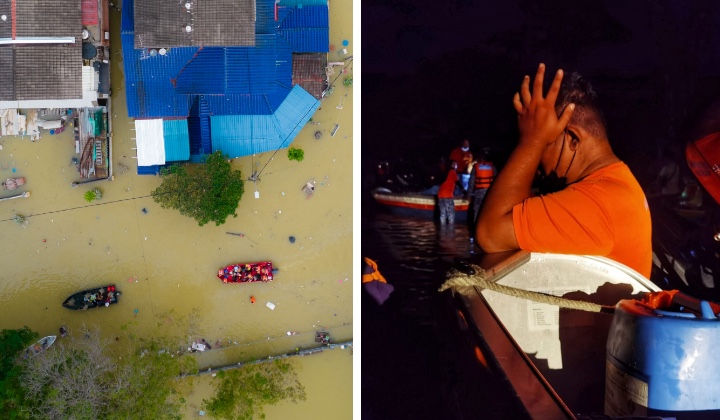 The restrictions imposed by the authorities have allegedly impeded aid for flood victims.

Citing an example, he said a group of volunteers had brought kayaks from outstation to Taman Sri Muda in Shah Alam to assist the flood victims.

Upon arriving on Sunday (19 December), they were stopped at a roadblock about a mile away from the flooded area.

The police did not allow them to proceed on the grounds that they had not received any instructions.

The volunteers couldn’t bear to abandon the flood victims. They decided to go in any way by launching the kayaks a short distance away from the road block.

Saifudin was speaking to TRP when met on the ground at Taman Sri Muda on Monday (20 December).

He added that when the volunteers wanted to send the kayaks elsewhere to help, they had carried the kayaks for a mile as the police do not allow their vehicle to come in.

Where Are The Empathy And Urgency?

Saifudin regrets that the authorities could not see the significance of speed in getting help to flood victims.

He added that NGOs and good samaritans have no hidden agenda, nor any intention of against the authorities.

The only reason is none other than to lessen the impact of disasters on vulnerable members of the public.

As it is, people have taken to social media to voice their disappointment in not being able to help just because of bureaucracy.

Even the armed forces could not bear to stand by and do nothing while the people are crying out for help.

Saifudin added that good samaritans had to negotiate with the authorities on the ground when they want to send in aid.

He narrated his own experience in which a group of volunteers led by him tried to bring food to Taman Sri Muda.

We had a tense conversation with the police before they finally allowed us to go in with the food. I wonder, why do we had to waste time in ‘negotiations’ when people’s life are stake.

He added that if VVIPs and big shots could easily come in and out in the name of ‘turun padang’ (going to the ground to meet the rakyat), there is no reason to hinder loyal citizens from helping their countrymen.

At the same, he expressed thanks to the rank and file in government agencies who had gone through hard days and nights to do the needful.

Saifudin said it is unfortunate that they are hampered by red tape and could not act – for better and for worse – without instructions from the top.

He pleads with them to be lenient and allow access to those who want to send aid to flood victims, so long as the SOPs and safety boundaries are adhered to.