Flood victims are largely disappointed that rescue took way too long to arrive. 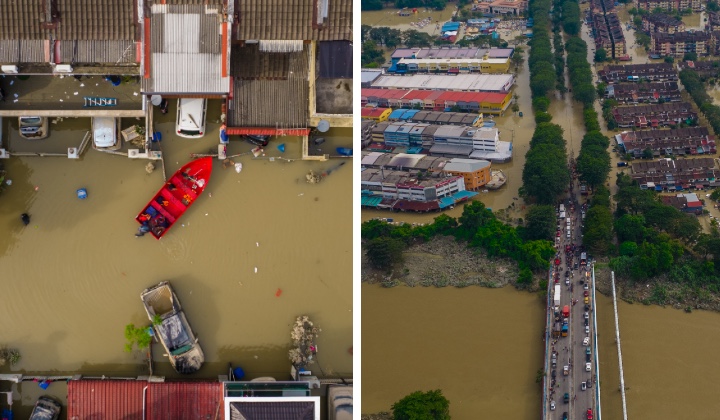 The rain may stop for now, but frustration and despair have just begun to swell for Taman Sri Muda flood victims.

Many had been cut out from the outside world for more than two days, seeking refuge on the second floor of their home.

It was frantic on the ground, as flood victims continue to scramble to dry land and safety.

The lucky ones made it ‘ashore’ by boats, others wade their way through muddy floodwaters.

It was a heart-wrenching scene at ground zero, as hungry flood victims asked around for food.

Some were asking the authorities to send a boat to their house as their loved ones are still trapped, unable to wade through the floodwater.

Others were seen checking whatever belongings they managed to salvage, including pets.

At the same time, volunteers were seen distributing food packs to flood victims.

Some were even too tired to eat. They just lied on the ground to take a nap, out of exhaustion or perhaps to temporarily forget the catastrophe in front of them.

People also grumbled that the elected representatives are nowhere to be seen, with one saying that the election is near and it will be ‘payback’ time.

Police were seen trying to dissuade people from getting back to their homes, for the sake of their own safety.

It was a scene out of a disaster movie, only this is really happening, right here in the heart of the nation’s most developed state.

Among the flood victims were retiree Supaya Letchunanan and his family, including his 89-year old mother Alagamal Perumal.

Exhausted but visibly relieved to have made it out safely, Supaya said he made emergency calls on Saturday itself.

The operator said help is on the way. We waited and waited but it never came. Sometimes we see rescue boats passed by and we called out to them, but it was useless. It’s bad, really bad. You shouldn’t treat people like this

Flood victim Supaya Letchunanan to TRP on his family’s ordeal

By Monday, the family could wait no longer and the 56-year-old decided to wade through floodwater to reach the authorities.

After more than 10 minutes of wading through floodwater, he reached them and managed to have them send a boat to his house.

Supaya said they endured pitch black darkness for two nights as they waited for a boat to come and rescue the family.

When water first entered the house compound on Saturday, Supaya did not think much of it.

I thought it would be just another typical heavy rain. But when water continue to rise, we escaped to the second floor. Soon after, we were cut off from the outside world as our phone ran out of battery.

Flood victim Supaya Letchunanan to TRP on the rude awakening

Better Late Than Never? Not Exactly

Another flood victim, 21-year-old Thivya Letchumi, managed to escape with her parents, elder sister and the family’s pet cat.

Thivya, who had lived there since she was born, said it was the first-ever flood experience for her.

She said it was an anxious moment for the family as her mother is paralyzed is wheelchair-bound.

They too endured two nights of darkness on the upper floor of their home, surviving on bread and water.

Thankfully, rescue finally came. It took five rescue personnel to get my mom onto the boat. We would not have been able to do it by ourselves.

Thivya feels relieved not that they reached safety, but she worries for her mother as it had been a traumatic experience for her.

She too felt the authorities could have reached them sooner.

While some headed to relief centres (PPS), some made their way back despite their home still being inundated in floodwater.

Among them is Bangladeshi S. Manick, who had lived there for 15 years.

The construction worker said he and his housemates have nowhere to go.

We came out to get supplies, and now we are heading back. We will try to hold out on the second floor. We are not given accommodations by the authorities and we can’t afford to stay in hotels, so back we go.

Flood victim S. Manick to TRP on his plan for the next few days

Like many others, Manick is counting the cost of the flood, especially from a financial standpoint.

He is taking unpaid leave to deal with the situation.

What if it rains again in the next few days? We don’t know. We can only hope and pray for the best.

Truly, the challenge has only just begun for the flood victims.