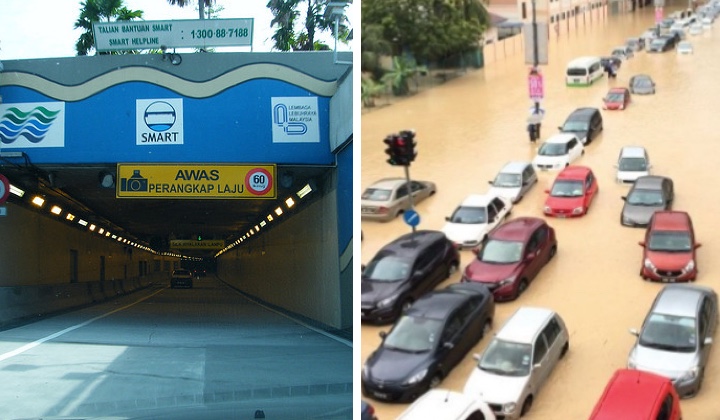 Floods in Klang Valley could’ve been a lot worse if it wasn’t for the Stormwater Management and Road Tunnel (Smart).

Water and Environment Ministry (KASA) secretary-general Datuk Seri Ir Dr Zaini Ujang, was quoted by Sinar Harian as saying that flood-stricken Klang Valley would have been worse off without it.

SMART diversion has been activated until mode 4 at 7.45 pm on 18 December until 12.00 noon today. The diversion has since been downgraded to mode 1 with as many as five million cubic meters of water successfully diverted since yesterday.

He said the Department of Irrigation and Drainage (JPS) has activated flood diversion in an effort to reduce the impact of floods.

Zaini added that it was the first time the diversion process was carried out for more than three hours ever since the Smart Tunnel – the world’s first stormwater tunnel with a built-in motorway – was completed in 2007.

This is a new record for JPS’s Smart Control Center. In the previous mode 4 operations on eight different occasions since 2007, each recorded less than three hours of diversion operation.

He explained that the water of the Klang river would have entered Kuala Lumpur at Masjid Jamek if there were no diversion.

Imagine if there are another five million cubic meters that are not diverted. If you do the calculations, Kuala Lumpur would have sink.

The Smart Tunnel is touted as among the world’s greatest tunnels and had even been featured on National Geographic.

It was built by MMC Corp in a joint venture with Gamuda to mitigate the recurring floods in the city of Kuala Lumpur, the financial, business and commercial hub of Malaysia.

Opened in 2007, the Smart Tunnel functions by diverting floodwater into the bypass tunnel in the lower channel of its motorway tunnel.

At 9.7 km long, the government-owned tunnel is the longest stormwater tunnel in South East Asia and the second-longest in Asia.

But so much trouble in the first place? Are there no other options to alleviate floods?

As it is, the Smart Tunnel project culminated from decades of flood mitigation planning after the devastating 1972 Kuala Lumpur floods.

READ MORE: Major Flood Once Every 50 Years: How The Recent Flood Stacks Up Against Previous Catastrophes

Whenever there are flash floods in the city, the Smart Tunnel inevitably comes to people’s minds.

Given what it’s supposed to do, the jury is still out there if the Smart Tunnel had been worth the while.

It has been criticised for failing to reduce flash floods in the city. Among the complaints over the years is that the Smart Tunnel had been slow to react.

The public had taken to social media countless times to voice their unhappiness with the Smart Tunnel.

The recent flash floods that devasted Klang Valley – said to be the worst ever recorded in decades – proved again that we must have missed something.

In its defence, the government said poor drainage systems are to blame for the recurring flash floods.