The woman took to social media to call for help. 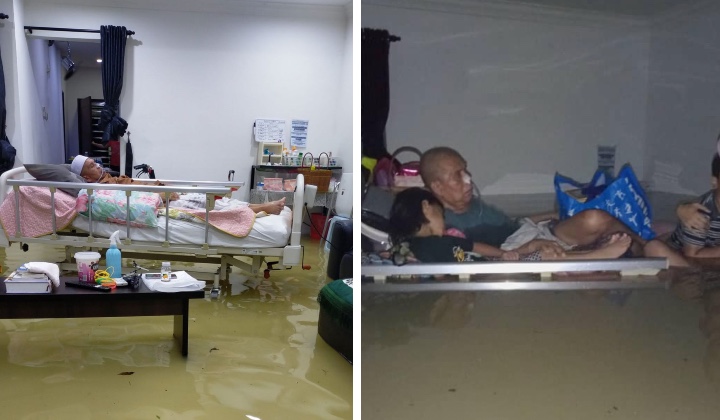 Recently, it has been raining a lot throughout the country.

The Klang district, like many other places, has succumbed to the worst flood in years.

Many areas are covered with water, even nearly submerging cars parked at the roadside!

READ MORE: [Watch] No Less Able Than Myvi At All! Kelisa Cuts Through Flood

The Shah Alam area adjacent to Klang is also flooded. Among the victims was a woman whose bedridden father was trapped in their home in Taman Sri Muda.

The woman, who goes by the username Roseanne Sein on Facebook, posted an SOS message to call for help on 18 December.

Her father was a stroke patient and her family had dialled the emergency number, but the ambulance couldn’t arrive because of the flood.

Under such circumstances, the whole family was trapped at home, and there was a power outage.

As a result, the emergency medical treatment for her father was also delayed.

Can someone help us get out… because my father has a stroke.

From the photos posted by the woman, it can be seen that the room is full of floodwater.

The water level is about to flood the bed, while the other furniture are already submerged in water.

His father was lying on a hospital bed with an oxygen mask.

The True Strength Of Social Media

The woman’s plea for help immediately attracted the attention of netizens.

More than 10,000 people retweeted in just one hour.

A netizen, believed to be a friend of the family, said that someone has tried to contact state leaders for assistance, hoping that the problem can be solved as soon as possible.

Subsequently, at about 11 pm, a netizen – who is believed to be a relative – posted another worrying photo in which his bed is almost flooded.

Meanwhile, Malaysians have been told to brace for more rains in the days ahead.

More information on the latest weather warnings nationwide can be found on the MET Malaysia website at www.met.gov.my.

In Selangor, the state government has set up dedicated hotlines for those who need help and information.