Ahmad’s students say he is a giving, warm teacher and always helpful. They never heard a bad word from him. 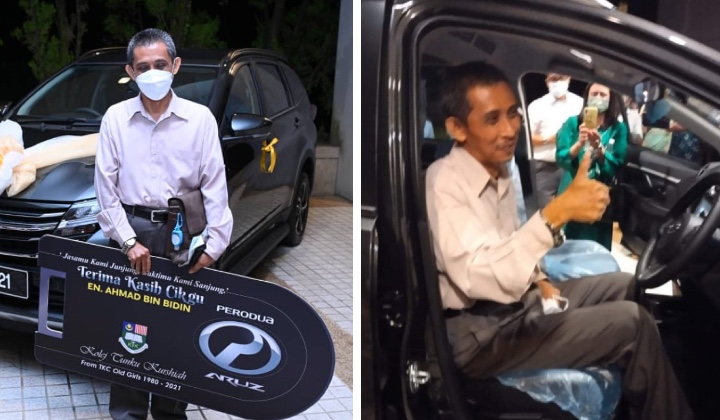 When he started his teaching career decades ago, 58-year-old Ahmad Bidin never imagined his students, past and present, would bid him farewell in such a grand way.

But he impacted a lot of students in his time at Kolej Tunku Kurshiah (TKC), and they put their resources together to give him a huge surprise.

His students gave him a memorable sendoff recently by presenting Ahmad with a Perodua Aruz.

As icing on the cake, the car registration number AMD 8521 reflects Bidin’s name as well as the year he started teaching and retired.

Netizens who know Ahmad described him as a very dedicated, patient and likeable person in his day-to-day teaching duties.

They said that Ahmad deserves every bit of the gift as he had been a teacher who is slow to anger and would never fault his students.

They also thanked Ahmad, who taught Additional Mathematics, for leaving behind sweet memories.

The car is fully paid in one lump sum, with money chipped in by Ahmad’s students throughout the four decades of his teaching career.

Twitter user @yaye_zaini added that Ahmad is a humble teacher who had declined the offer to be appointed a school principal.

He retired as a senior academic teacher.

Despite the good intention of the gift, some netizens still managed to find fault with it.

Some netizens claimed that the gift is no big deal as most of the students at TKC come from well to do families.

The accusation triggered a war of words among the netizens.

Located in Bandar Enstek Nilai, TKC is touted as one of the country’s premier all-girl residential schools.

The school is known for the impressive results and achievements of its students.

It moved to its present location in 2013.