The Lalamove driver could not borrow enough money in time to pay for the cakes. 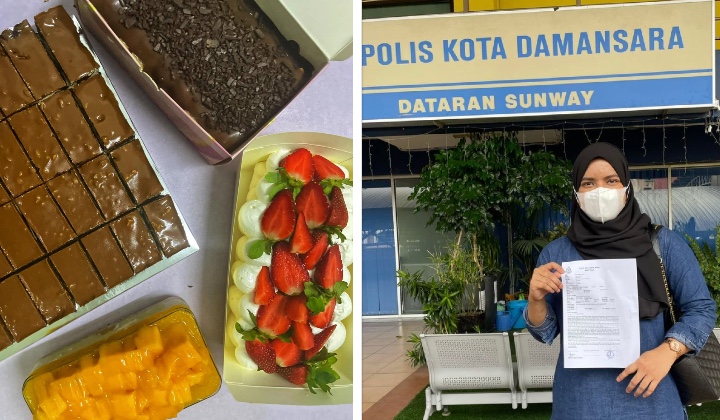 Recently, a netizen by the name of Farah Nasuha Md Zaki posted on Facebook that her cakes were thrown away by a Lalamove driver.

Farah Nasuha complained that she had stayed up late and put in a lot of hard work to prepare the cakes for her customers.

Unfortunately, the cakes – 28 boxes in all – were thrown away by the Lalamove driver because the cakes had started to smell due to warm weather.

The driver apologized for the mistake and tried to pay for the losses, including by borrowing money from friends.

However, he could only come up with RM450 by the deadline, as his friends could not borrow him the promised amount.

He apologized to Farah Nasuha, adding that he is currently jobless and is no longer with Lalamove.

Adding that he will be busy looking for a job, he thanked her and wished her well.

Farah Nasuha pointed out on Facebook that although the RM450 was not enough to compensate for all her losses, she appreciate the guy’s sincerity to solve the problem.

And so, she decided to put the incident to an end.

No One Is Angrier Than A Woman Has Her Cakes Dumped

Initially, Farah Nasuha was very unhappy with what had happened.

She had complained to Lalamove about the rider’s actions, as well as taking the story to her Facebook, though it was later taken down for violating Community Standards on privacy.

As a last resort, she had even lodged a police report.

She also shared the chat history with the Lalamove driver, in which the latter said that the cakes were spoilt due to the hot weather.

When she asked where the cakes were to get it back, the Lalamove driver replied that “the cake has been thrown away” and apologized to her.

He said that he is new to the job and asked for forgiveness.

She also posted on Facebook an invoice of the cakes, which included:

Letting Go and Moving On

The posting was shared more than 1,200 times with over 600 comments in just a few days.

Many netizens blamed the driver for his behavior, and some netizens comforted Farah.

Netizens also give suggestions on what kind of transportation company will be safer.

Despite all that, Farah has chosen to resolve the matter with the rider peacefully, even if she had to bear some losses.

Trulu, to err is human; to forgive, divine.