The decision was made in view of the Omicron Covid-19 variant which has made its way to Malaysia. 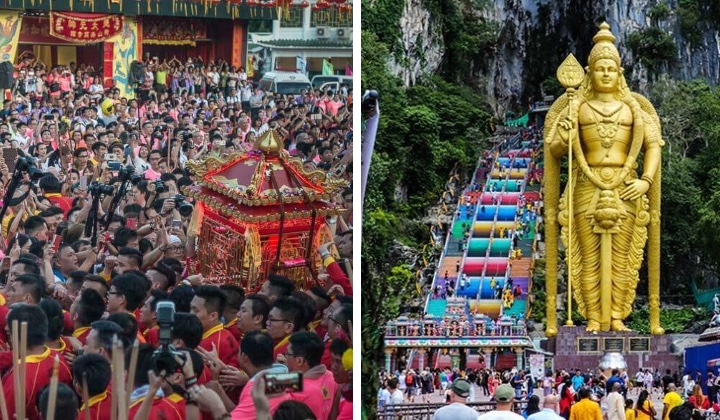 All festive processions which will be celebrated next year are not allowed.

The ban includes the kavadi procession for the Thaipusam and Chingay festivals in conjunction with the Chinese New Year.

Minister of National Unity Datuk Halimah Mohamed Sadique was quoted by national news agency Bernama as saying that the country is facing the new variant of Covid-19, Omicron.

Applications (for the processions) made in conjunction with the Thaipusam celebration was not allowed (because) we are facing a new variant (Covid-19).

Secondly, regarding Chingay, she said that as the procession for the Thaipusam celebration is not allowed, any other procession will also be prohibited.

She added that the decision is decided by several committees.

The Kota Tinggi MP was speaking in Parliament during the Minister’s Question Time (MQT) session in the Dewan Rakyat on Tuesday (7 December).

She answered an additional question from Steven Choong Shiau Yoon, the independent MP for Tebrau.

Choong wanted to know if the Chingay parade can be allowed under the standard operating procedure (SOP) for the upcoming Chinese New Year.

The Chingay parade is held annually in the streets of Penang and in Johor Bahru as part of Chinese New Year festivities.

Decision Not Simply Made

The DAP lawmaker wanted to know about the SOP drafted for the Thaipusam celebration on 18 January 2022.

Halimah said the proposed SOP for the festival including this year’s Christmas celebration is expected to be tabled during the committee meeting for approval, sometime in mid-December this year

Accordingly, it would be tabled at the Pandemic Management Technical Working Group Meeting on 13 December 13.

It will then be brought to the Ministerial Quartet Meeting on 14 December, before being presented to the Pandemic Management Special Committee Meeting chaired by Prime Minister Datuk Seri Ismail Sabri Yaakob, expected on December 15.

After getting the results of the meeting, a letter of notification on SOP approval will be sent to religious leaders and a media statement will also be issued.

In response, non-governmental organizations (NGOs) said the move is timely.

I would fully agree with the decision not to allow mass gathering of religious event that will gather a lot of adherents. This is to avoid any flare up of infections of Covid 19. We all agree on this, in my view. No religious gathering, be it Christian, Muslim, Hindu, Buddhist or others are exempted.

He added that since these gatherings are held infrequently, crowd control will be difficult, with SOP likely to be breached.

As such, it would be more prudent to avoid such mass gatherings especially in view of the Omicron variant which has made its way to Malaysia.