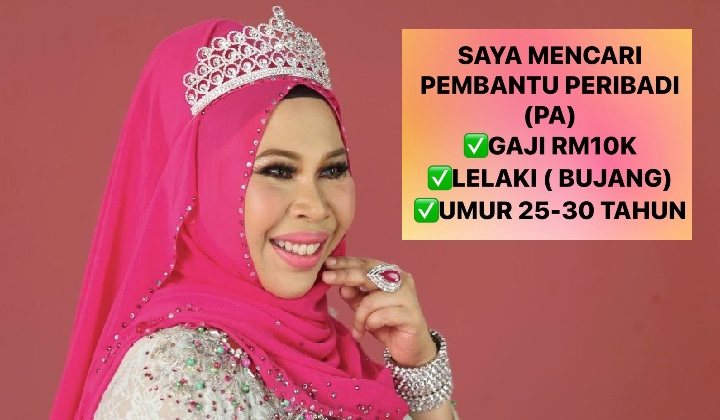 She posted an advertisement looking for employees to fill the position of personal assistant through her Instagram account.

In the same posting, Vida, who is famous for her hit single ‘I Am Me’ also gave some details on the job offer, notably a salary of RM10,000 a month.

Must be handsome. For women, there are other positions.

The posting immediately drew the reaction of many, including those who wanted to try their luck.

Among them is popular comedian Shuib Sepahtu who jokingly volunteered.

The spontaneous response given by Vida touched the hearts of many.

She said that Shuib can apply to be another kind of candidate, in what is perhaps a veiled reference to her search for a husband.

Vida is still single after things did not work out with her ex-fiance Ahmad Iqbal, who was also her former assistant.

Feisty, Tender, She Speaks Her Mind

Vast swaths of netizens have found themselves in Vida’s verbal thrall.

For some of us, Vida’s language is gibberish, but it works.

Her hit single I Am Me had more than 13 million views on her official Youtube page.

Despite her happy and cheerful personality, Vida has suffered in her life.

It was a tragic and painful accident from which she rebuilt her life.

She chose to be happy, no matter what people are going to say about her despite receiving so many critics.

She is also the producer of her own talk show – Diva De Vida.