The UK outlawing Hamas is an attempt to deny Palestinians their freedom, said Wadah. 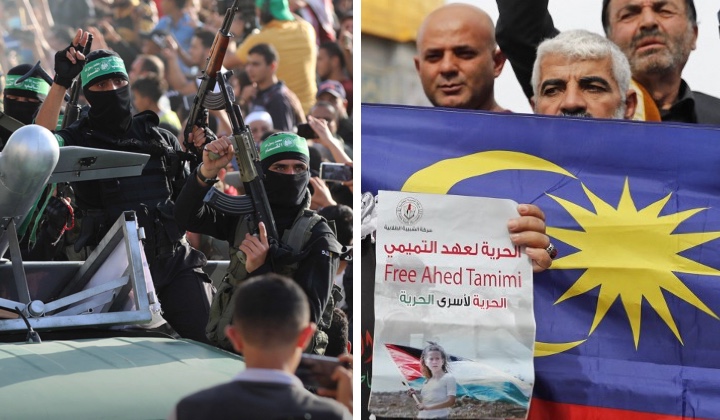 The Movement for an Informed Society Malaysia (Wadah) has slammed the United Kingdom (UK) for designating Hamas as a terror group.

In a statement, Wadah described it as a shameful attempt to criminalize the Palestinian resistance and deny popular Palestinian political representation.

He pointed out that the Palestinians are trying to resist the Zionist Israeli brutal occupation and illegal extremist colonisations.

Hamas has no political interests in Britain nor has it ever conducted activities in the UK. The move against Hamas is meant to disrupt the many initiatives in the UK which are supporting the Palestinian cause and the Palestinian population particularly in Gaza.

He accused the UK of trying to stifle ever-growing support for the Palestinians in the country, including peaceful activism and charity work which are pro-Palestine.

Mohd Halimi added that Hamas is a legitimate Palestinian homegrown movement that has proven to be a successful political party in Gaza and West Bank.

Accordingly, Hamas is also strongly predicted to win the Palestine general elections if it was ever held.

The UK cannot designate Hamas as terrorist group as an attempt to deny Palestinian voters from their freedom to choose, to express their will and aspirations.

A Palestinian Sunni-Islamic fundamentalist, militant, and nationalist organization, Hamas regards itself as a resistance movement that is also anti-occupation, anti-apartheid and anti-colonialism.

Support for Hamas – in cash and in kind – runs deep in Malaysian society especially among the Muslims, all in the name of humanity and ummah ( an Arabic word meaning “community”).

Malaysia is the only country in the world in which the citizens’ passports clearly state that the passport is ‘valid for all countries except Israel’.

Inevitably, blood had been spilled on Malaysian soil.

Palestinian professor Fadi Mohammad al-Batsh, 35, was killed in a drive-by shooting on 21 April 21, 2018, in Kuala Lumpur.

Batsh was reportedly walking from his apartment at dawn to perform prayers at a local mosque in the Kuala Lumpur suburb of Gombak, when he was hit by two gunmen riding a motorcycle.

Hamas accused Israeli spy agency Mossad of the assassination, which the latter denied.

Malaysia, which has no diplomatic relations with Israel, has long been at odds with the Zionist regime.

Malaysia has been boycotting Israel in its sympathy for the Palestinian cause for decades.

Malaysia had also been accused of training Hamas militants in the country, which the Home Ministry denied.

Malaysia refused to grant visas for Israeli players, and as a result, the tournament was called off.

Needless to say, the Israelis were not amused.

Israel exports to Malaysia were US$7.02 million (RM29.50 million) during 2020, according to the United Nations COMTRADE database on international trade.