Taxi drivers were tricked by PH into spreading lies about Rosmah, said Najib. 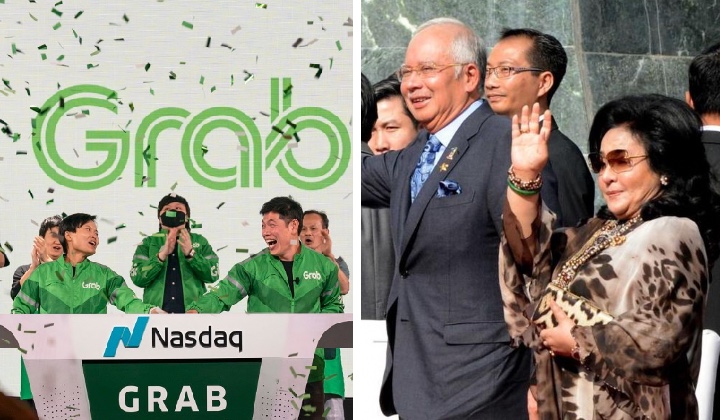 Nothing could hurt a husband more than when someone tells one or more persons an untruth about his wife.

For years, former prime minister Datuk Seri Najib Razak had to put up with slanders against his wife Datin Seri Rosmah Mansor.

Critics have alleged that Rosmah is the owner of the e-hailing company, Grab.

Najib said the indisputable truth finally surfaced with the listing of Grab at NASDAQ stock exchange in the United States recently.

READ MORE: Grab Setting Off On The Right Foot At Its NASDAQ Debut

In a Facebook posting, the Pekan MP said he is certain that many were surprised by the Ministry of Finance’s announcement to replace the MRT and LRT shuttle buses with Grab.

He pointed out that before GE14, one of the slanders spread by those who supported Pakatan Harapan (PH) was that Rosmah was the owner of Uber and Grab.

Najib added that Uber is an American company and is currently worth USD72 billion (RM300 billion) while Grab is a local company started by young Malaysian entrepreneurs during his administration.

Najib explained that if it is true that his wife is the founder and owner of Uber and Grab then she is the most successful entrepreneur in Malaysia who has also carved a name abroad!

Unfortunately, this is not true. My wife has nothing to do with Uber and Grab. After GE14, I met some taxi drivers. Some of them apologized to me for being deceived by this slander because they were Uber and Grab sparked a competition to their source of livelihood.

Najib lamented that many taxi drivers were tricked into believing, confident that the PH government would declare Uber and Grab illegal in Malaysia if they won.

Because of that, they also helped to campaign for PH and mocked the BN government every time they bring passengers, said Najib.

Najib criticized PH for their connivance in deceiving and manipulating taxi drivers.

He claimed that PH had poisoned the mind of taxi drivers as a spreader of anti-government propaganda since they meet a lot of people every day.

I admit I can see many Malaysians happy with the e-hailing service at that time. Many Malaysian drivers also earn extra income when they become Grab or Uber drivers.

You Can’t Go Against Technology

Najib added that it would have been futile to ban Uber and Grab because it only required one smartphone app.

The former Umno president said he had to balance between the needs of Malaysians who benefit from e-hailing services and the needs of the taxi industry.

For that, I feel there needs to be a balance of competition for all services. Our plan is to regulate Uber and Grab while ensuring that the government also provides more assistance to taxi drivers so that they can also compete healthily.

He said taxi drivers were never neglected throughout.

Apart from financial assistance, the BN government during his time as PM also tried to get taxi drivers to get private permits.

He said this would be better than renting permits from crony companies that received thousands of legacy permits in the previous administrations.

Najib said the slanders had probably started when he advised Khazanah to invest in Grab when they were just starting out.

I could see the potential in this company. However, after making an assessment, Khazanah did not make an investment in Grab and I did not proceed further as I respect their stand.

He is saddened to see that Khazanah missed the bus, as Grab is now worth USD11 billion (RM46 billion).

Netizens were divided in their opinion. Some poured in their support for Najib over the Grab saga, while others remain sceptical.

Some, such as Facebook user Nazeri Sofhia, blamed the educated class for being deceived so easily.