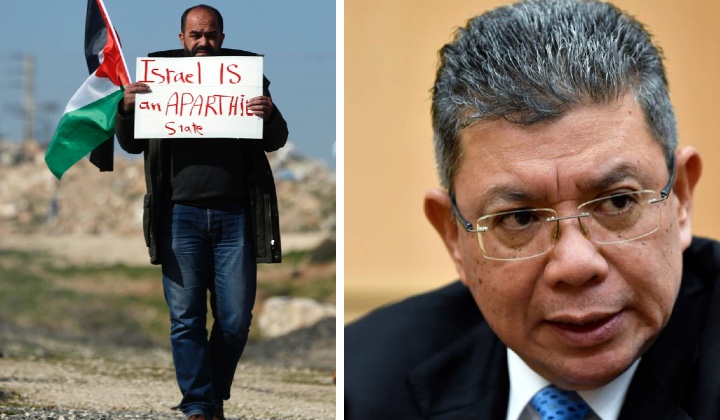 Foreign Minister Datuk Seri Saifuddin Abdullah called out Israel for its oppressive policies towards the Palestinians.

The cruelty of Israel includes repeated violence and aggression against Palestinians including women and children.

He also took Israel to task for its systematic oppression and crimes of apartheid (a policy or system of segregation or discrimination based on race).

The Palestinians have suffered tremendously under the Israeli occupation and blockade and the latter’s racist and discriminatory policies, denial of basic civil rights; imposition of harsh conditions; large scale land and property confiscation, as well as other inhumane acts.

Saifuddin added that the Palestinians deserve justice and peace, and the global community owes it to them.

To this end, Malaysia will continue to pursue actively the Palestinian agenda bilaterally.

Malaysia will also partake in various regional and international forays towards realizing the Palestinian peoples’ aspiration for freedom.

The ultimate goal is the realization of the State of Palestine based on the pre-1967 borders, with East Jerusalem as its capital, based on internationally agreed parameters, international law, and relevant United Nations (UN) resolutions.

Despite the harsh rhetoric, Saifuddin said Malaysia is committed – together with the international community- to seek ways for a peaceful, just and lasting solution to Palestine and her people.

The comments were leveled amidst fresh tensions between Malaysia and Israel this month.

Uproars were triggered after Israeli athletes were barred from joining a squash tournament in Malaysia.

The tournament was moved to Malaysia from New Zealand because of coronavirus-related travel restrictions.

Comments by Saifuddin came on the occasion of the International Day of Solidarity with the Palestinian People, a United Nations-organized observance.

The United Nations observes 29 November as the International Day of Solidarity with Palestinian People to mark the adoption of the UN’s resolution to partition Palestine into two states.

It is not the first time that major events planned for Malaysia were cancelled over the country’s refusal to grant visas to Israeli participants.

In 2019, Malaysia was stripped of its right to host the the World Para Swimming Championships after it threatened to deny visas for Israeli athletes.

In 2015, Israeli sportsmen withdrew from a windsurfing competition on Langkawi after being denied visas.

Malaysia has no diplomatic relations with Israel, and does not allow its citizens to travel to Israel or allow Israelis to travel to Malaysia.

There are no direct relations, either in the past or present between Malaysia and Israel, and Malaysia is a country far away from Israel.

But, in the name of humanity and ummah (worldwide community of Islam), Malaysia has strongly stood up for the rights and freedoms of the Palestinians and has supported their struggles.

While Malaysia officially maintains an outwardly hostile position towards Israel, commercial relations between the two countries do exist.

Israel exports to Malaysia was US$7.02 million (RM29.50 million) during 2020, according to the United Nations COMTRADE database on international trade.